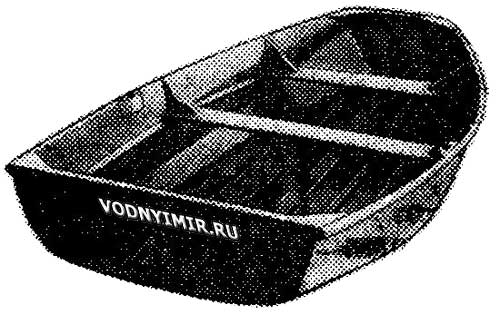 Jack Holt is an English yacht designer and owner of a company that supplies all kinds of equipment for sailing, ranging from small practical things (and yachtsman's clothes) to metal spars and sails for yachts of the «Soling» class, became widely known as the author of the project of the popular «Mirror Dingy» boat (for a description of the boat, see on this page). There are over 50 thousand boats of this class in yacht clubs in England and other European countries. One of the secrets of the widespread use of the shverbot is the manufacturability of the design, which allows the yachtsman to assemble the hull from blanks on his own; this does not require building a slipway and fitting numerous details of the frame frames to each other.

In the catalog of products of the company «Jack Holt Limited» last year, another novelty appeared, in which the idea of assembling the body from pre-cut blanks using wire clips and subsequent gluing of seams with fiberglass tapes on epoxy resin was further developed. We are talking about the deck boat «Jack-Shprot» for medium-sized yachts. The length of the boat is only 2.29 m; the width is 1.30 m, but after testing on the water, it was recognized as safe for four adult yachtsmen and two children to cross from the yacht to the shore! (Of course, such a load can be allowed only with calm water.) 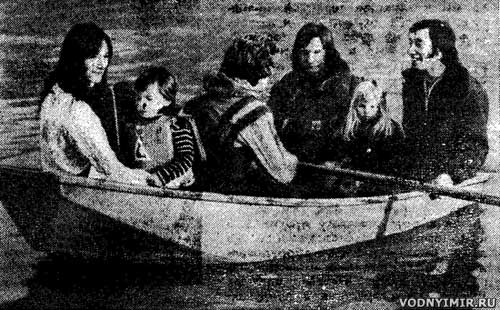 «Jack-Shprot» can be an ideal «dingy» for two fishermen fishing on a river or in a sea bay near the shore. The boat is stable, easy to move under the oars, can be used with an outboard motor with a capacity of up to 5 hp. Its weight together with a pair of oars does not exceed 30 kg, so one person loads it onto the upper trunk of the car without much effort. 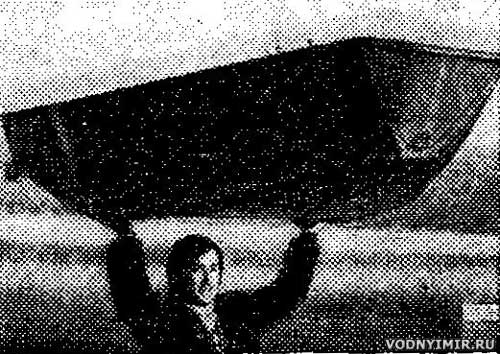 The contours of the «Shprot» — a flat bottom with a sharp cheekbone and a bow transom — are characteristic of the smallest boats with plywood skin.

Outline of the boat «Jack-Shprot» 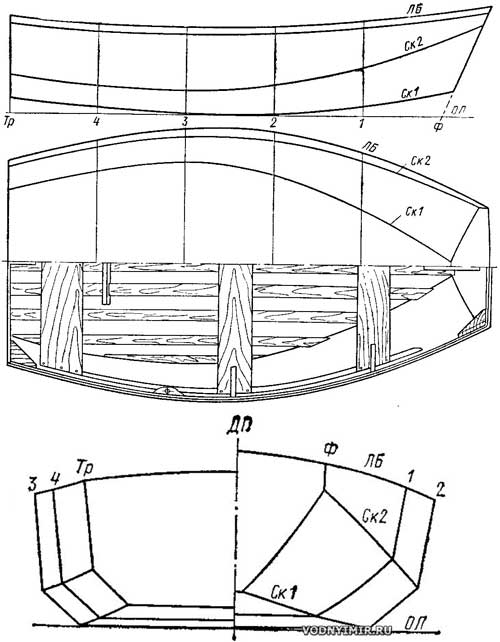 In the international language of yacht designers, such vessels are called «prem». And in the modern English-Russian dictionary, this word has two meanings: 1) a baby carriage; 2) a flat-bottomed vessel. Apparently, the similarity with the rectangular body of the stroller served as the basis for the new term for yachtsmen who are eager for a sharp word. Nevertheless, the blunt-nosed and clumsy at first glance aces have received recognition from the most fastidious sailors. The «prem» shape allows you to get a wide waterline of a large area, which plays a primary role in ensuring the necessary stability and carrying capacity of a small boat. Thanks to a blunt nose the boat swings less with powerful strokes of a yachtsman, easily floats up on a steep oncoming wave without splashing.

Compared to the classic «prem», Holt's ace has two important improvements. The first is the «keeliness» of the bottom increasing towards the nose, due to which the underwater part in the nose turns out to be sharper and the ace loses speed less when meeting a wave. The second is a double cheekbone: with an incomplete load, the waterline becomes narrower, the speed of the boat increases.

The company offers the buyer five strips of 6 mm plywood, which are cut along the contour in accordance with the outlines of the edges of the tuzik skin. In England, the standard length of sheets of waterproof plywood is 2.4 m, so they do not need to be joined in length. The kit also includes aft and bow transoms, transverse seat banks, billets of slats glued to the bottom, knits, collars, metal fasteners, epoxy glue with a hardener and fiberglass tapes. The buyer independently drills paired holes along the groove of the side and zygomatic edges of the skin, passes a wire through these holes and twists it from the outside of the case. Then both sides are assembled in the same way with the bottom, bow and stern transoms, all grooves and joints are glued from the inside with fiberglass tapes in 2-3 layers.

After the fiberglass has cured, you can «bite off» the ends of the wire clips protruding from the housing and glue the connection with fiberglass from the outside. Knits, transverse cans and pillers under the middle jar give the body of the «Shprot» the final rigidity and shape. Thin wooden slats glued to the skin from the inside protect the plywood from abrasion by the feet of passengers. Laths of collars and keel made of solid wood are attached from the outside.

The designer believes that due to its small dimensions, the ability to transport a boat on the trunk of a small car and the relatively low cost (a set of blanks costs 50.7 pounds sterling), «Jack-Shprot» will be widely used in English yacht clubs and among fishermen-motorists.

For the self-construction of the «Jack-Shprot» boat, see here and here.