Home>>> Motorboats, boats, yachts>>> Transfer on a serial motor boat «Blagg-480» with a 100-horsepower «Evinrude» from Oslo to Brighton

1400 miles on a motorboat. Transfer on a serial motor boat «Blagg-480» with a 100-horsepower «Evinrude» from Oslo to Brighton

In the spring of 1979, the «Blagg-480» serial motorboat with a 100-horsepower «Evinrude» made the transition from Oslo to Brighton, where the next «boat show» was to open — an exhibition of small vessels. Peter Shorter, a Norwegian agent of the British company «Blagg», conceived this voyage in order to demonstrate the high seaworthiness of a new type of trimaran (read about the main characteristics of the «Blagg-480» motorboat here).

The difficult ice and hydrometeorological situation forced several times to postpone the date of departure from Oslo. On April 30 — the next «appointed day» — the weather forecast was bad again, but Peter, who had lost patience, decided to start anyway. His partner — one of the Norwegian journalists — wisely considered it an adventure and flatly refused to participate in it. However, this did not stop Peter: he immediately declared that he would go to sea alone.

Most likely, this would have happened if Espin Proitz, the driver of the boat on which the journalists were going to escort Peter to the exit from the Oslo Fjord, had not accidentally asked if he needed an experienced companion? As soon as the captain of the «Blagg-480» made it clear that he did not seek solitude at all, Espin disappeared for a few minutes and returned with a passport and storm clothes. Already from Sweden, he called home — «warned» his family and superiors that he was a participant in an unusual voyage to England on an open motorboat.

The first stage of Oslo — Kungshamn took place in very difficult conditions. The height of the waves sometimes reached 4 m. The 150-liter fuel tank cracked from the blows, gasoline began to flow out, saturating the air with vapors. Snow charges and high waves made it difficult to navigate, but still the brave men were able to see the lights of Kungshamn and at exactly 21.00 approached the shore.

The next day, the sea condition did not improve. As soon as the «Blagg» went to sea, the windscreen was blown off by a powerful wave that rolled through the vessel. It is not known what thickness it had: 3 mm, as on the first samples of «Blagg», or 5 mm, as they began to do on serial boats. One thing is clear: such a wave would have knocked out much thicker glass! The travelers hurried to take refuge in the harbor of Lucecil. We managed to walk only 20 miles in a day. It was stormy on the third day, when the rush to Gothenburg was made, but this time most of the way lay in skerries — under the cover of the islands. Everything would be fine if the Swedes accepted Norwegian money to pay for the hotel and «bunkering».

When crossing the Kattegat, the wind subsided, but visibility deteriorated. Peter, who, as a lookout, was lying on the deck in the bow, trying to see the island of Lesa in the darkness, dived, against his will, into the icy water when the «Blagg» jumped out on a sandbank. During this forced bathing, all the cash flew out of the captain's pockets, so when the brave sailors reached Aalborg, they had to use his gold watch.

The further way to the North Sea lay through Denmark. It was not difficult to overcome 200 km of inland waters along the calm Lim Fjord. And the sea seemed all the more inhospitable. A gale-force wind was driving huge frothy crests towards them. The only right decision was to return to Kattegat, protected from western storms, and follow the Kiel Canal into the North Sea. And so they did. Crossed Denmark again. The day's march was completed in Ebeltoft, as the fuel ran out. There was nothing to sell; I had to rest while waiting for a money transfer.

The next day, the long-awaited transfer came. Urgently filled the gas tank and rushed forward to catch up. With darkness, the «Blagg» entered the Kiel Canal and was immediately stopped — flashing lights appeared and the siren of the police boat howled. The Norwegians were politely but firmly explained that the upper speed limit when driving along the channel is 15 km/h, not 15 km/m. In addition, they obviously forgot that according to local rules, crossing the channel at night is allowed only accompanied by a pilot. Since there was no «room for a pilot» on the 4.8-meter motorboat, we had to stop before dawn.

In the morning, the sailors of merchant ships crawling out of the channel and piling up at the entrance to it were shocked: a small motorboat, jumping from wave to wave, confidently turned into the open sea and, having developed at least 40-knot speed, quickly disappeared over the horizon. On this day, the travelers were accompanied by unusually good weather. The trouble came from the other side. Not far from the entrance to Norden Harbor, giving way to the ferry, Espin turned off the fairway for a minute; as a result of a strong impact on some underwater obstacle, the propeller was damaged and the propeller shaft bent.

To a desperate call from Peter, who was convinced that no one was taking on the repair of his «Evinrude» in Norden, the organizers of the run replied that the nearest place where they could help him was Delfzale in Holland. There was still a good 90 miles to go with the wildly vibrating engine.

At low tide, they anchored somewhere on the sandbanks, went to bed. The tide woke them up. Peter decided to go overboard and inspect the propeller before going further. As soon as he set foot on the bottom, he began to sink. Espin dragged him into the boat with all his might, but could not pull him out of the terrible grip of liquid sand. Then he tied the end of his captain under his armpits, gave the boat a go and only in this way extracted Peter from the quicksand. Shaken by what had happened, the travelers made their way between the sandbanks for another six hours.

For several days, while the engine was being repaired, Peter and Espin rested. The adventures of the last few days also affected, and the stress of running the boat at full speed in difficult conditions, and, perhaps, no less — fatigue from constant hassle with refueling. Along the way, equipment that failed in stormy conditions, including a radio and an echo sounder, was put in order. The motor, with the exception of the nodes affected by the impact, was in good condition. The batteries, despite the fact that their box was softened by gasoline and crumpled, also worked fine.

At midnight on May 14, the «Blagg» put to sea again. And again there was a storm, and in addition with fog. We walked until we had enough fuel. The next bunkering before the throw across the North Sea to the shores of Albion was done in Helder. Meanwhile, the weather has improved somewhat: the excitement has subsided, but the fog has become even thicker. Almost all 6.5 hours of the journey to Southwold (180 miles) had to go by compass. When the entrance to the port opened, the deviation was no more than 300 m, and there was less than 10 liters of gasoline in the tank. 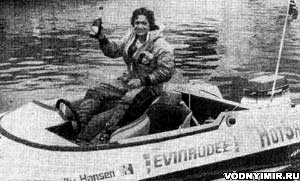 I had to rest for a day while customs officers figured out how to classify the import of equipment and equipment produced by a number of different countries on both sides of the ocean. One more crossing — and on a wonderful spring day, the Blegg is moored at Tower Bridge in London. And the trip ends on May 16 in Brighton.

In 12 days (77 running hours) 1,400 miles were covered. In some sections, the speed reached 40 knots, and the average speed was 18.2 knots with an average fuel consumption of 28 liters/h.

In this transition, a serial vessel was used, supplemented with rescue and navigation equipment necessary for sea navigation. In addition to the main outboard motor «Evinrud», there was an emergency 6-horsepower motor of the same company, an inflatable life raft and a set of emergency equipment on board. Instead of the regular ones, special Cartwright seats were installed. The crew was wearing special protective suits and life jackets.

Based on the materials of the magazines «Motor Boat and Yachting», «Water Skier & Powercraft».