Home>>> Motorboats, boats, yachts>>> The «Blagg-480» motorboat is a hybrid of a trimaran and a sea knife 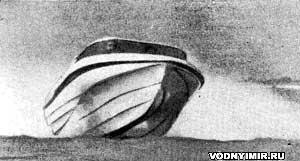 Agree, it is not often that the exhibits intended for display at the exhibition arrive «from across the sea» on their own. The heads of the recently organized English company «Blagg Bot Co. Limited» rightly judged that if their main product — the new motorboat «Blagg-480» — arrives at the next exhibition of pleasure craft in Brighton, having traveled 1400 miles by sea, it will be the best advertisement for it. Indeed, not every motorboat with a length of less than 5 m is capable of such a desperate journey through the stormy North Sea! This transition is described on this page. Here, at the request of readers, we will once again focus on the main features of the «Blagg-480» motorboat.

The editorial board appealed to its founders, the founders of the company, brothers Rex and Woody Blagg, with a request to provide as much additional information as possible. Of course, it was impossible to count on exhaustive data, including a sketch of the contours. After all, the Blagg brothers, proudly declaring that «this is a revolutionary modification pleasure craft for the last decade», it is reasonable to consider this data a secret of the company! However, the brochures they kindly sent clarify something. 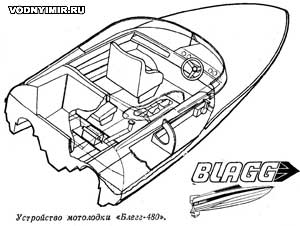 The figures already given attract attention: the ratio L:B=2.7 is typical for most traditional motor boats that are not seaworthy. The same boat, according to the unanimous opinion of many observers of leading foreign «yacht» magazines, just has unusually high seaworthiness for a 5-meter vessel.

«When we went out into the Solent Strait, where the wind with a force of 5-6 points spread a short large wave, I tensed up, resting on the footboard, and prepared for blows, writes, for example, Jonathan Gray from «Water-skier and Powercraft», but they did not follow. The ship was almost on a cushion.»

Gaven Howe from the magazine «Yacht and Boat Owner» summarized his impressions as follows: «This little boat is able to be easily controlled under a high-power motor and walk on an agitated sea as fast as possible for a boat of similar dimensions. There were no signs of sleming, even when the «Blagg-480», after taking off from one wave, landed on the slope of the next.»

Surprisingly, the very high upper limit of the permissible power. According to the current American BIA standards, a vessel of such dimensions can be operated only with a motor power of no more than 100 hp.

The safety of sailing with a powerful motor was the subject of separate tests, which Dick Johnson from «Motor Boat and Yachting» tells about: «We tested two «Blaggs», one with a 140-horsepower «Johnson», and the other with an 80-horsepower «Mariner». Both were repeatedly put into a turn at full throttle with a full shift of the «steering wheel». The circulation diameter in both cases was about three body lengths. The boats turned around with lightning speed without a noticeable roll and rushed forward without loss of speed. The main feeling is the centrifugal force pressing against the side.»

According to the first pictures of the boat that appeared in print, it could be said that the softness of the course on the wave «Blagg-480» is due to the very large keeliness of the central hull, which is not found in any model of pleasure craft with deep V contours. The designers reported the exact value of the keeling angle of the bottom: it is equal to 45°.

So what is the «Blagg-480» motorboat? Is it really a «revolutionary» step forward in the development of the contours of high-speed pleasure craft or another «advertising duck»?

The last decade and a half has given the boat world a number of wonderful ideas and daring projects. Trimarans and hulls with deep V contours, the «Sea knife» and W. Fox's three-keel sled, multi-mode contours and the «Sea Dart» are far from everything! And if you look closely at the pictures of the «Blagg-480», you can find a curious combination of all these options in its contours.

The «Blagg-480» is a three-keel vessel, but it cannot be called a trimaran. The keels of the side sponsons on the «classic» trimarans are always slightly raised above the main one to reduce the wetted surface on the move, and the sponsons themselves are located only on the nose 2/3 of the length of the hull. Here, the picture is reversed: the side sponsons are located on the contrary — only on the aft third of the length, and their keels are located on the same level with the keel of the main hull. There is also no other feature of trimarans — the balance of the completeness of the contours due to the wide nasal tip.

If you mentally discard the side sponsons of the «Blagg-480», you will get contours that are very similar to the «Sea knife»: the same narrow delta-shaped ski in the DP, the same steeply rising sides that turn into a smooth bend when paired with the deck, the same developed splash guards with a bent, like the «reversers», the working face.

A flat planing platform — ski has not only a central body, but also lateral sponsons widely spaced apart from the DP, mating with it with high arched tunnels. The top line («arch») of the tunnels has an angle of attack relative to the horizontal plane of the skis. This is already a «variation on the theme» of W. Fox's three-keel sea sled.

There is no need to list the positive qualities of each of the three main types of contours, a successful combination of which are the contours of the motor boat in question.

Like all trimarans, the «Blagg-480» has stability on the move and in the parking lot. The testers mention that when they took turns getting into the boat, standing on the cockpit coaming, the roll did not exceed 5°. Three people sitting close to one side also do not create any alarming roll. The designers managed to achieve this not only thanks to widely spaced sponsons, but also thanks to three pairs of breaks — ledges — on their internal and external surfaces: the restoring moment increases dramatically when each next ledge is immersed in water. With a sharp turn, significant hydrodynamic forces arise on the planing surfaces of these ledges entering the water, preventing an increase in the roll. When turning, the relative speeds of the stern are higher than the bow; the magnitude of the restoring moment on short sponsons located in the stern becomes sufficient to stabilize the entire hull.

Due to the fact that the sponsons are shifted aft, the «Blagg-480» got rid of one of the disadvantages of the «classic» trimaran — sudden braking when the developed bow tip meets the wave. 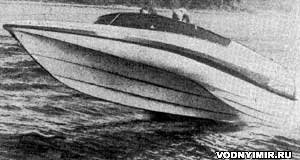 Planing «Blagg-480», like Fox's sleigh, on three skis located on the same level. Recall that such surfaces with a very large elongation are planing at optimal (4-6°) angles of attack (the increased running trim is clearly visible in the photos compared to traditional boats); this makes it possible to increase the hydrodynamic quality. The threshold for the loss of longitudinal stability of movement lies in the range of higher speeds; hence the possibility to use significant engine power without fear. The small transverse stability of such planing surfaces is compensated in this case by dynamic stabilization of widely spaced sponsons again.

Additional lifting force is also generated by using the energy of spreading jets on ledges — longitudinal redans. Their relatively wide working areas also help at the moment of planing: thanks to a small, smoothed «hump» of resistance, the «Blagg-480» gently takes off, which is important for water skiers.

It is impossible to neglect the effect of aerodynamic unloading at such speeds. The oncoming air flow, mixing with water dust, slows down in the tunnels and somewhat unloads the hull; air, which, unlike water, can compress, helps to dampen shocks. Speaking of blows. Unlike W. Fox's sleigh, the width of the body of the «Blagg-480» is not the same across the entire width, it is «deltaviden», like the «Sea Knife». Due to this, when encountering a large wave, the magnitude of the lifting force increases gradually; the boat does not lift its nose sharply, substituting its planing planes for a powerful blow, but gently pierces the crest of the wave. The narrow sections of the central body and sponsons, which have a small value of the longitudinal moment of inertia, do not prevent this.

As you can see, there are no outstanding — «revolutionary» — ideas in the design of the new boat. The indisputable merit of the Blegg brothers is the skillful combination of the advantages of each of the well-known types of contours they combine. They really managed to design a very interesting vessel.