The common walleye is a predatory fish of the perch family.

Pike perch. How to take it?

Pike perch, whose meat is distinguished by high gastronomic qualities, is especially appreciated by fishing enthusiasts. Another fisherman can spend the whole day on the pond without a single bite in anticipation of taking his soul away in the evening, during the exit of the pike perch to fat. It takes pike perch in the morning at dawn, sometimes at night, which is radically different from its closest tribesman perch, which, as a rule, ceases to be caught with the onset of evening dawn. It differs from the perch in that, having grabbed the bait, it does not rush to the side, but rests, pulls deep or tries to lie down on the bottom. In general, the pike perch is not a very good fighter: it is enough to pull it from its place, and then it obediently goes on the fishing line and only at the very shore or the boat begins to tear again and pull the tackle hard.

The pike perch does not like muddy water, prefers both large rivers and small rivers, lives in large lakes and reservoirs. And if pike perch has taken root in a particular reservoir, then multiplies quite quickly. An example of this is the Senezh Lake near Moscow. A few years ago, walleye fry were launched there, and now he has become the owner of the lake. The large royal ruff that was previously found in the lake has almost disappeared, even pike has become rare in catches, roach has thinned.

Rifts, sections of the river with a solid bottom, underwater slopes, suvodi, squiggly pits — these are the places where it is most likely to find a walleye, if it does not reveal itself when it goes out to fat. Its bite is uneven. It takes especially actively after spawning (in the middle zone of Russia in the first half of June), and then with the cooling of the water — in September. At this time, pike perch is caught both on mugs and on spinning. It is difficult to guess when, at what depth the pike perch is better caught. Sometimes from the bottom, sometimes on top.

The most likely habitats of walleye.

This fish chooses pits near steep banks, deep riverbeds for its stops. Depending on the time of the year and the weather, the pike perch can hunt without moving far from the parking lot, as well as on shoals or shoals. If the flock is numerous, then during the zhora splashes are visible and audible over a large stretch of the river, more often at steep banks, where there is a side current. In this case, walleye can be caught from the shore in the wiring on live bait-bleak or from a boat with a long-distance float release. 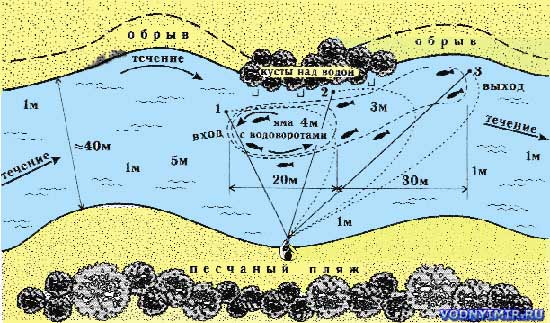 Choosing a place to catch walleye from the shore.

The pike perch fight can last more than an hour, after which it goes into the depths, where it is caught with bottom fishing rods. In the wiring, this predator is also caught when it goes to a shallow sandy shore or to a rolling, where it hunts for a minnow.

Pike perch is caught less often in the afternoon than in the morning. But if a breeze blows during the day and small waves or ripples appear, its bite becomes animated. In the evening and at night, as a rule, it approaches the shores. In the summer, the success of catching this large fish largely depends on the weather. But closer to autumn, in October, when predators gather in flocks and go to winter camps, the weather is less important. At such a time, the pike perch takes confidently and is often detected by itself.

Methods and gear for catching walleye

Pike perch on rivers are caught along with other fish. However, if you know all the habits of a predator, you can specifically engage in catching it.

They catch pike perch on spinning, on the track, on mugs, on throw and bottom fishing rods. He takes a light, narrow spinner, the best of the live nozzles are bleak, spruce, minnow. In reservoirs where ruff is found in abundance, he does not disdain this prickly nozzle. Cases of catching walleye on small carp are not very rare. It has been noticed that a two- to three-kilogram predator rarely takes a large live fish, and if it does, it will only injure, it will not be able to swallow, which means it will most likely get off the hook itself. 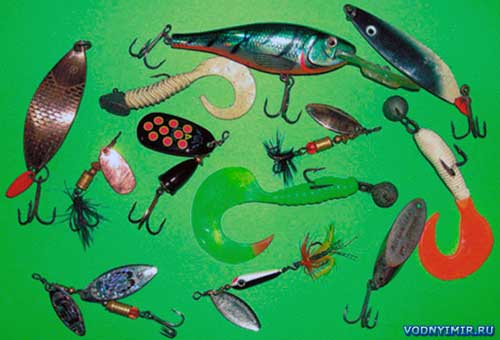 Winter baubles for walleye — narrow, 6-8 cm long, tin, brass and lead. Usually this predator grabs the spinner across, squeezing it tightly. Therefore, a short cut after a pause often does not pull the spinner through the teeth of a pike perch. Another sharp one follows, but-alas! — the fish has already released the bait, left.

There will be fewer empty cuts if one of the hooks of the spinner is moved to the middle. Then a light jerk is enough for the hook to stick into the mouth of the pike perch.

It is better if the spinner often and shallowly fluctuates, as if it trembles. But the pike usually grabs her motionless when the angler stops pulling the angler. When baiting this fish, they usually pause, counting up to four or five, followed by a short cut. Failure is guaranteed to the one who often and strongly pulls the spinner, scaring the fish.

It remains to add that the ringing spinner does not contribute to success either, which, however, is easily avoided by wrapping the ringlet hole with a thread, preferably red.

Once on one of the fishing trips, in the dead of winter, we came to a squiggly pike-perch pit opposite the mouth of the river bay — staritsa. But there was no bite. We went up the river, stranded. Here I took the first pike perch for a small copper spinner.

Following me and a friend on a vein of 0.2 mm carefully pulled the pike perch. I'm sitting at the same hole: pike perch is a schooling fish, they should take more here. And here's a jerk again. So the fish pecked — every 20-30 minutes. I put 4 pike perch in my backpack, a friend — 3. Each — about 1 kg.

Since the middle of winter, the pike perch in the rivers begins to travel, goes to shallow places with a sandy bottom. There he takes small spinners, preferably red-copper. Takes sluggish. Therefore, pauses during spinning in 3-4 seconds are necessary. The tackle needs thin, patience is «thick». But you can catch walleye.