Home>>> Motorboats, boats, yachts>>> The main elements of the vessel

The main elements of the vessel

Let's consider the main elements of the vessel. A small vessel, like any transport vessel, consists of a hull (the vessel itself) and superstructure or deckhouse. The hull of the vessel is the main part, which includes the kit and the skin. The set consists of longitudinal and transverse links that serve as the basis for the hull shell of the vessel, which provides the hull with water resistance and, together with the set, strength and rigidity. The outline of the hull, as a rule, is smooth, the points are characteristic only for the bow and stern. The forward end of the vessel is called bow, and the rear — stern; the sides, or the walls of the hull — right and left sides, when viewed from the stern. The part of the hull that is under water is called underwater, and above water — above water, the lower part of the hull — bottom, and the upper, horizontal — deck. The deck on small vessels, for example on motor boats, may be absent.

Bulwark — lightweight construction — continuation of the side above the deck in the bow and middle parts of the vessel. In the aft part, the bulwark is called the taffrail. The bulwark can be temporary (wooden or canvas), raised during the excitement, when passing rapids, sailing, etc.

Cockpit — a cutout or recess in the deck to accommodate people.

Motor niche is a waterproof structure at the transom of the vessel, forming a recess in the hull of the vessel and designed to accommodate an outboard motor and provide the required freeboard height.

The set of the vessel's hull (see figure) is a structural design consisting of longitudinal and transverse links: keel, stem, after stem.

The main elements of the hull design of the boat 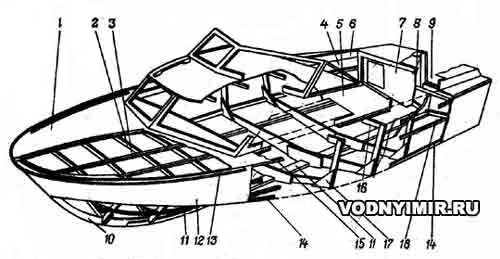 Stem — front structural design (continuation of the keel). It ends with a set of the hull of the vessel from the bow. In small-sized motor vessels, the stem is usually inclined, smoothly turning into a keel.

The afterstay is the structural design of the aft tip of the vessel (continuation of the keel). It ends the set ship's hull from the stern. The stem may consist of two parts: the front is the starnpost, through which the propeller shaft passes, and the rear is the rudderpost, on which we hang the steering wheel. On motorboats from the stern there is a transom board (transom).

Stringers — internal longitudinal ties for fastening the skin. They are divided into side and bottom — keelsons.

Frames — transverse hull side connections. The distance between the two frames is called span. In the theoretical drawing, rods are called the contours of the cross-section of the vessel.

Beams — transverse deck connections. The hull of a small vessel can be divided by transverse bulkheads, which are made waterproof. Bulkheads reach the deck or are different in height. The extreme bow of the vessel between the stem and the first bow bulkhead is called the forepeak, the extreme aft compartment is called the afterpeak.

— a longitudinal bar on the inside of the side of a wooden boat at the height of the waterline, and more often above it, connecting the upper ends of the frames of one side;

— a wooden or metal bar installed outside the side to protect the vessel from damage during impacts during mooring.

Gunwale is a flat bar covering the edge of the skin and the ends of the frames.

Collar is a longitudinal wooden slat on the outside of the sides, which serves as an external timber used to protect the sides from damage.

Coaming is a construction that borders a cutout in the deck to protect hatches and cockpits from being overwhelmed by water.

Slan, or payol — boards made of boards that are stacked on frames to protect them and the skin.

In addition to the hull, the small vessel has a number of devices: steering, mooring, anchor, etc.