Catching asp with a transparent float — a water ball

When asp hunts, its fight can be determined by numerous bursts. Here it is, in the palm of your hand! But catching a fast predator is not so easy. Perhaps these tips will help you.

The streamlined body of the asp looks like a rocket: powerful and swift. Artificial baits should be a match for him — the same speed. Rotating spinners with an elongated narrow lobe have a higher rotation frequency than those equipped with wide lobes. The upper mouth of the asp indicates that it picks up prey from the surface of the water. However, in the fall of this fish are often caught at great depths. You can try it there...

Where a lot of bleak is caught, most likely there is also asp. It feels great on the course of large rivers, but it can also be found in bays, especially at the confluence of streams. A reliable bait is a dead bleak on a single hook of float equipment, which is used to catch the near-surface layer.

Asp baits should be conducted quickly. When wiring, they should go close to the surface of the water. For such fishing, it is recommended to use a reel with a high gear ratio — (6:1). A soft monofilament fishing line will extinguish a hard bite and powerful jerks during the vyvazhivaniye.

Asp baits should not have a sophisticated design, but «long-range», since it is often necessary to make quite long casts. One of the best spinning baits for asp is considered to be a combination of a simple sinker-«olives» and a tee.

Some amateur anglers put another head tee on such large baits so that even those silvery «fighters» that grab the «decoy» in front are reliably detected.

Fishing with a water ball and a fly is exciting and catchy. A transparent float half filled with water (preferably oval in shape) provides a casting range, and the streamer next 1 m behind it (mostly white) serves as a bait. A ball splashing on the water with a quick winding from afar attracts the attention of the asp. Be careful when casting! Before the snap falls on the water, the fishing line must be slowed down with your index finger, otherwise it may get tangled.

To throw a small artificial bait at a long distance, when catching asp, a transparent float is used — a water ball.

Most fish, as a rule, immediately run away if some object, like a bulldozer, walks through the water. Asps, on the contrary, will come and curiously begin to look at what is hiding behind the bow wave and bubbles, and when they see a fly plowing the water, they grab it!

Oval, transparent water balls with a fishing line passed inside proved to be the best. With the help of rubber stoppers, you can quickly change the distance between the ball and the bait: depending on the bite, the length of the leash is 70-120 cm.

Of heavy water balls designed for long-distance casting, models with an insert fixing the fishing line are best suited. But be careful! If the ball moves several times, for example, when vyvazhivanii, then a defect will quickly form on the fishing line.

To prevent the bait from catching on the leash, when casting the line, hold it with the index finger (arrow a). The leash is pulled at the same time, and the bait flies in front of the water ball (arrow b).

Elements necessary for the installation of equipment for asp 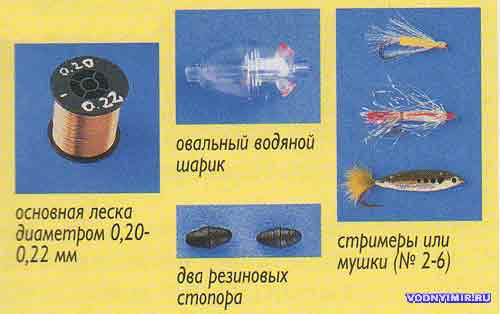