Trimaran with your own hands — a homemade boat made of steel

I have long wanted to build a small, comfortable and safe boat that could be transported on the roof of a car or on a light trailer. Having read projects for self-construction, I decided to build a boat with trimaran contours with my own hands. In December, my experimental trimaran made of 1 mm thick steel sheets was ready. 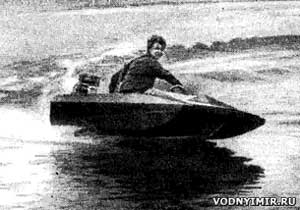 In May, on a lake near Tyumen, I tried out my brainchild. My friends were skeptical: «How can you swim on such a trough?».

But now the «Whirlwind» engine is launched, and a homemade boat made of steel with a small trim goes planing. The impression is that she is flying, barely touching the water with her sponsors. With a passenger on board, the speed was about 40-45 km/h.

And with one driver, the steel boat performed acrobatic jumps from wave to wave, but at the same time it went gently and steadily and easily took turns at full speed at any angles to the wave. 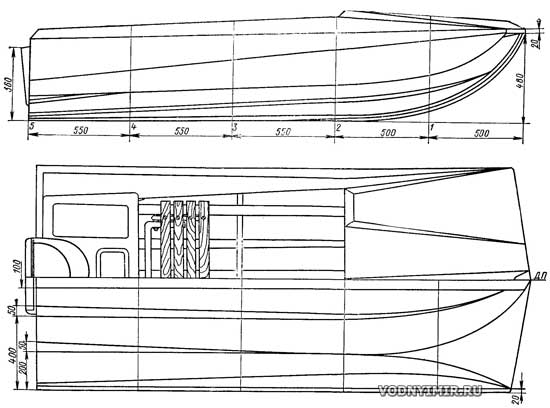 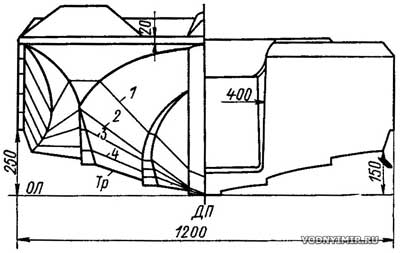 My trimaran is steel, but for those who want to build such a trimaran on their own, with their own hands, I would recommend a softer material, for example duralumin D16 with pre-heat treatment. The sheets should be bent according to the marking on the edge bending machine, and the radius should be large enough to avoid the appearance of cracks. To make a tunnel arch, a wedge is cut, the edges of which are flanged for riveting in three rows. In general, flanging for riveting is provided at all junctions of sections with each other. A corner of 20x20 or 15x15 mm should be put on a set of frames and a transom binding . Longitudinal redans and an overhead plate on the keel should be made of a softer material than the main body, they are riveted to the bottom.

Construction of a homemade trimaran made of steel for self-construction 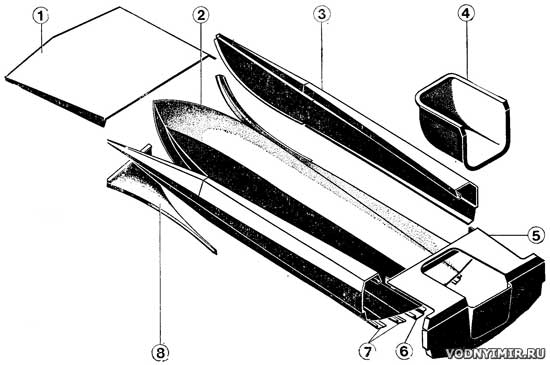 To assemble the housing section, it is most convenient to fix it on a wooden slipway with clamps. The assembly must be carried out in this sequence. First, the sides are riveted to the bottom section, then the transom and keel. It is necessary to fix the deck from the bow, and then attach it to the sides. Then the frames are installed sequentially from the first to the fourth, and only then the under-engine niche is riveted.

During the summer navigation, I also identified some design flaws of my homemade steel trimaran. Already at a 40-centimeter wave, the nasal tip was splashed. At high speed, the spray jets touched the sponsons in the middle part (to avoid this, I lowered the keel by 25-30 mm). The boat goes planing with a large trim on the stern and is very sensitive to alignment. To prevent this, it is desirable to install remotely controlled transom plates and shift the center of gravity as much as possible to the nose. To ensure unsinkability homemade steel trimaran must be filled with foam voids.

I believe that such a boat can be manufactured at any shipbuilding plant. I have developed an approximate technology for manufacturing such a trimaran in factory conditions. 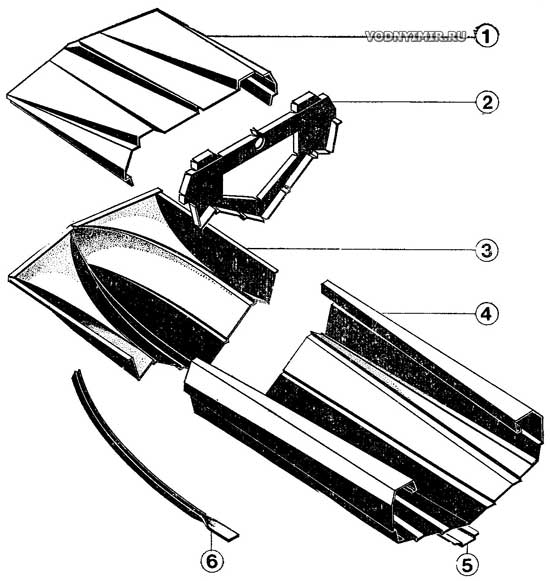 Riveting of some joints can be replaced by reflow welding. It is more expedient not to rivet longitudinal redans, but to obtain them with the help of additional bending of the bottom section.

The design of the transom and the under-engine niche is similar to the option for independent construction.