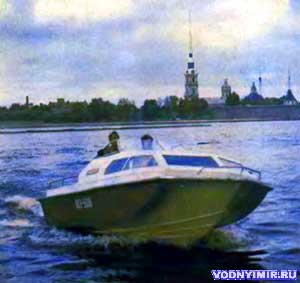 In our northern latitudes, as practice suggests, a cabin motorboat with a length of about 5 m is necessary for long family trips: with smaller dimensions, it is not possible to ensure habitability; at large — the vessel will not go out for planing with outboard motors available for sale, it will require the installation of an automobile converted engine and a reverse gearbox, which significantly complicates the matter.

Undoubtedly, a keeled hull with deep V contours would be the most seaworthy option, allowing you to maintain high speed even on the wave of large bodies of water, but this would also require the power of an automobile engine. With moderate outboard motors, it turns out to be more advantageous to have a compromise-type body — with a combination of flat and keeled elements, with cheekbone bends (on the entire nasal half of the length), resembling trimaran sponsons. With a rational choice of contours and careful study of the hull design, this option allows you to achieve a relatively low weight and an acceptable combination of speed and seaworthiness of the boat.

When considering the theoretical drawing of the «Rainbow-51», it can be noticed that in terms of the contours of the bottom, it largely resembles the previous model of the same «family» — lighter and 1 m shorter in length «Rainbow-41» (see magazine «Boats and Yachts» No. 61): the same narrow almost flat section on the bottom — a ski that compensates for the loss of hydrodynamic quality on the inclined side sections of the bottom; the same cheekbone bends that improve access to planing, ending at shp. 4 and further (on the aft half of the hull) having the appearance of a horizontal wide ledge-a splash guard; the same wide deck in the nose. The experience of successful operation of the «Rainbow-41» gave every reason to lay the same principles in the basis of the theoretical drawing of the new vessel.

To reduce splashing and flooding of the motor boat during the course of the wave, the lower part of the front wall of the cabin is made inclined to the nose — it will play the role of a breakwater. For the convenience of passengers and safety, low handrails are made on the forward deck, in the cockpit and on the roof of the cabin.

When planning the Rainbow, all the advantages of «trimaran» contours with a large width at the level of the cheekbone and a blunted bow deck are used. With a hull length of only 5.1 m, the cabin turned out to be quite spacious: it has an area of 2.1x1.75 m with a height of 1.2 m; it can accommodate two or even three beds, a table, lockers (under sofas) and lockers.

In the cockpit, which has dimensions of 1.4x1.75 m, there is a control panel on the port side (on the bulkhead of the shp. 4), two armchairs and a stern sofa. The cabinet under the driver's seat can be used to store a gas stove and dishes.

Fuel tanks are conveniently placed under the recess and the aft sofa. To ensure unsinkability, foam blocks are fixed along the sides in the area of shp. 4-6 (except blocks of the same material introduced into the hull structure).

«Rainbow-51» must be equipped with remote control motors, running lights, a light awning over the cockpit.

In the fall of 1976, the first motor boat «Rainbow-51», built by an experienced Leningrad water tourism enthusiast E. K. Karasev. During the very first, still short-term tests on the Neva and in the Gulf of Finland with two rather worn-out 20-horsepower «Whirlwind» engines, a speed of 43 km/h was measured with a displacement of about 700 kg.

According to E. K. Karasev, the rolling capacity of the Rainbow in the parking lot is greater than that of an ordinary small-keeled boat, but you can walk on board without fear. The boat obeys the rudder well, the radius of circulation is no more than one and a half lengths of the hull. At full speed, the boat overcomes the steep tow wave quite gently.

The construction of the hull itself according to the drawings given is not particularly difficult; for inexperienced amateurs, the book «15 projects of ships for amateur construction», released in 1975 by the publishing house «Shipbuilding», can serve as a necessary guide. The main feature of the proposed construction option is that the hull is assembled in an upward keel position on a pre-assembled deck section that has neither perish nor saddle (the first Rainbow-51 was built in this way under the open sky).

Materials for the construction of the housing should be prepared according to the given specification.

Design and details of the hull of the motor submarine «Rainbow-51», 184 KB

The device and details of the cabin, 64.4 KB

According to the working drawings and the layout breakdown (in full size), frames, deck details, side and frontal walls of the cabin are made. When assembling the deck decking (det. 23) plywood sheets with a thickness of 4 mm are glued «on the mustache». The privalny bar is glued out of thin slats in place. Slats of 15x15 mm are glued along the cockpit and along the perimeter of the recession, and shorties (children 24) are glued on frames 2-5. 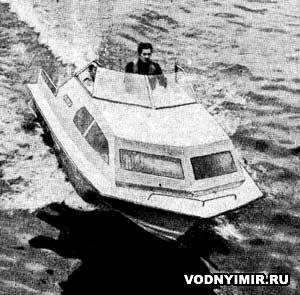 The simplest slipway will be two boards with cut edges, placed horizontally at a distance of 1780 mm from each other. The deck is stacked on them with a set up. Then they are installed, temporarily loosened with slats and glued frames, and after checking the distances between them along the keel and cheekbones — all the slats of the longitudinal set (it is necessary to fix the bow of the deck before installing the keel). A layer of foam with a thickness of 100 mm is laid along the perimeter of the deck.

After malkovki and checking the smoothness of the contours on the exposed set, the sheathing sheets are installed in the usual manner. The entire skin does not have a double curvature, plywood easily fits on the set. Before installing the redans, the housing must be pasted with a single layer of fiberglass. Redan No. 1 and the «ski» should preferably be pasted with two or three layers of fiberglass additionally. The transom around the perimeter is molded to the skin with several strips of fiberglass from inside and outside the hull. After pasting, the body must be cleaned, plastered and painted.

The hull, turned keel down, is being completed. The payoles in the cockpit and in the wheelhouse can be made solid by laying a layer of foam on the bottom and pasting it with fiberglass. The structures of the cabin, the wall of the aft sofa, the cabinet under the driver's seat, lockers, etc. are mounted.