Home>>> Motorboats, boats, yachts>>> The main dimensions of the vessel

The main dimensions of the vessel

Changing the amount of cargo and people on board changes the draft and height of the freeboard, creates a roll and trim, which affects the navigational qualities and maneuverable elements of the vessel.

To determine the navigational qualities and maneuverable elements of the vessel, as well as in its daily operation, the overall and calculated dimensions are taken into account. In the management of any vessel, including a small one, its overall dimensions are especially important:

Overall length is the distance measured in the horizontal plane between the extreme outer edges of the protruding parts of the bow and stern of the vessel.

Overall width is the distance measured perpendicular to the diametrical plane between the outer edges of the protruding parts of the vessel in the widest part (the break beam, engine fencing, obnos, etc.).

Overall draft or the largest — the vertical distance measured in the plane of the midship frame from the level of calm water corresponding to the current waterline to the lowest point of the outer skin or bar keel, as well as to the lowest edge of the propeller; measured in parking and usually differs from the draft on the move. The same distance measured under the same conditions, but without cargo and passengers, is called an empty draft.

roll — the inclination of the vessel relative to its longitudinal axis to one or the other side;

trim — the inclination of the vessel relative to its transverse axis, i.e. to the bow or to the stern.

If the vessel has the same draft of the bow and stern, then they say that the vessel is sitting on an even keel.

The trim is calculated as the difference between the recesses of the bow and stern. Depending on which end of the vessel sits deeper, it is said that the vessel has a trim on the bow or on the stern. Vessels are usually built on the basis of sailing on an even keel, but in practice this is rare, since the trim depends on the location of the cargo, people, and speed. Sometimes the trim is created artificially. During the transition from fresh water to salt water (from river to sea) and vice versa the draft of the vessel changes due to the difference in the densities of salt and fresh water. In salt water, the vessel has a draft less than in fresh water.

Side height — vertical distance measured in the middle of the vessel (amidships) from the main line to the deck (or to the gunwale).

Freeboard height — the difference between the side height and draft (N-T) — is the value of the variable. To ensure the safety of navigation — the preservation of buoyancy, stability and unsinkability by the vessel — the minimum freeboard height is normalized. The minimum freeboard height is determined by the smallest distance from the current waterline to the deck line or cutout in the transom at full displacement of the vessel. The ratio of the length of the vessel to its width L/B varies widely and characterizes the stability and seaworthiness of the vessel. It is within the limits of: for motor boats 2,3-3,7, for modern high-speed planing 2,3-2,7, for high-speed open boats 2,3-3,2, for low-speed open boats of increased seaworthiness 3,2-4,5, for seaworthy boats 2,3-3,2, for motor-sailing vessels 2,5-3,3, for sailing yachts up to 5,0, for kayaks up to 6.5.

An increase in this ratio reduces the stability of the vessel.

The handling of the vessel also depends on the relation L/B. Increasing this ratio improves stability on the course, but somewhat reduces agility, which requires a large steering area, and vice versa.

The ratio of side height to draft H/T affects stability. With the growth of the H/T ratio, the sailing capacity of the vessel increases. The value of H/T for boats and motorboats, depending on the height of the freeboard, ranges from 2.0 to 3.0. The largest H/T are seaworthy motor vessels. For sailing keel yachts H/T is reduced to 1.5.

With an increase in the ratio of width to draft B/T, the stability of the vessel increases, the ability of the vessel to maintain speed in waves turns out to be lower than that of a deep-seated vessel. This ratio is 10-12 for light shallow-seated boats and dinghies, 5-6 for most boats, 2.5-4 for seaworthy fishing vessels, 1-2 for sailing catamarans.

The smaller the ratio of length to draft L/T, the more maneuverable the vessel is. 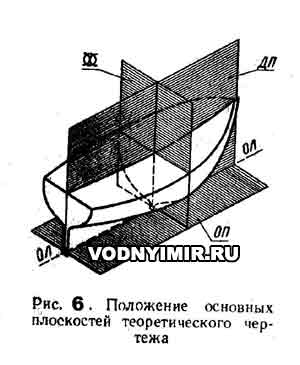 The main dimensions characterize only the size of the vessel. The seaworthiness of a vessel can be judged by the shape of its hull. A complete picture of the shape of the hull is given by a theoretical drawing, which shows the intersection lines of the outer surface of the hull contours with secant planes. The theoretical drawing is the main design document for the construction of the vessel.

Three mutually perpendicular planes are taken as base or main planes (Fig. 6).

Diametral plane (DP) is a vertical longitudinal plane of symmetry that runs along the middle of the width of the vessel and divides the vessel into right and left parts. The image of the vessel in this plane is called sideways.

The main plane (OP) — a horizontal plane tangent to the keel line (the very edge of the hull on a wooden vessel) at its lowest point; the line (straight line) of the intersection of the main plane with the DP is called the main line (OL). The image of a vessel in this plane is called a half-latitude.

The plane of the midship frame (midship) is a vertical transverse plane that runs along the middle of the estimated length of the vessel, usually through the most complete cross section. The image of the vessel in this plane is called the hull.