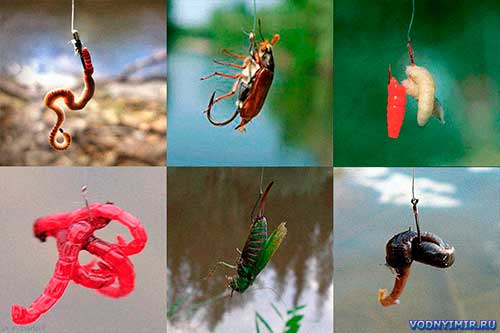 No matter how perfect a modern float tackle is, it still ends with a hook. And you need to put something on the hook. So, the nozzles that can be recommended for spring fishing.

Let's start, oddly enough, with the usual bread crust. Buy a loaf of white bread at the store. Then you need to cut off the crust from it and cut it into small pieces, preferably in the form of cubes, so that one side of the cube does not exceed 10 mm in length. The crust should not only be well-fried, but also moderately elastic, because it will have to hang on the hook No. 10 or No. 15 for some time. The better the crust of the loaf is fried, the more fragrant the smell of baking coming from it in the water, and the faster the bream will bite on it.

For catching bream, you can also use a bread crumb attachment. Preparing such a nozzle is quite simple. To do this, a piece of bread crumb is plucked from the loaf, slightly flattened and bent in half, covering the hook. After making such a nozzle, you should not touch it with your hands anymore — the fewer foreign odors on the bread, the faster you will see the bite.

How does such a cake behave in water? It is enough to lower the hook with the bread crumb into the water, and you will see how in a couple of minutes the cake will turn into a fluffy lump. The same thing will happen with this nozzle and at the point of casting the tackle. What kind of bream will refuse such a delicacy?!

If you need to throw the bait very far, for example, fifty meters or further, and if fishing will be conducted at night, then you need to use ordinary boiled pasta. This nozzle will not fly off the hook even when cast over long distances. Sugar, salt, cake, vanilla — all this can and should be added to the pan when cooking pasta for fishing.

In the spring, one cannot ignore another popular nozzle — «chatterbox». It is prepared from semolina surprisingly simply, you just need to be patient. In the evening, pour one tablespoon of semolina into an ordinary faceted glass, fill it with cold water and stir the cereal thoroughly with a wooden stick. After 20 minutes, stir the semolina again and add a little dry cereal. Add the grits, stirring it every time, until the dough begins to stretch after the stick. It is important to have patience here, because each time the next addition of cereals, it is necessary to stir the semolina for at least three minutes, and without hurrying. When you get a mass of the desired consistency, transfer the «chatterbox» to the jar that will go fishing with you, and close it with a tight lid, be sure to be hermetically sealed.

Already on the pond, just before fishing, it is necessary to mix the «chatterbox» again, but at the same time, as in the case of bread crumb, you can not touch it with your hands. The «chatterbox» is placed on the hook using the same thin stick with which you stirred the bait. The thread of the «chatterbox» stretching behind the wand is literally wound on the hook (it is enough to make a few turns).

The «chatterbox» works well from May to September. Many anglers, however, believe that this bait has one very significant drawback — it must be changed with each re-casting. And we, on the contrary, are of the opinion that the need to replace the «chatterbox» is precisely its main advantage. Yes, it takes time, but the fish is offered a fragrant dough every time.

The queen of the fields corn is also not the last delicacy on the fish table. In the old days, fishermen with such activity as today did not use corn as a nozzle, but when fishing on cultured carp ponds became popular, canned corn «Bonduelle» went into business. I must say that carp really bite well on this bright and fragrant bait, and it's easy for an angler to use it — open a can with a can opener and stick the grains on the hook.

Canned corn in some places does not disdain even bream. And in the Rybinsk reservoir in early spring, our friends have repeatedly fished out large roach for canned corn grains.

The list of attachments of plant origin will be far from complete, if nothing is said about the pearl barley. At the end of spring, steamed barley grains help out even when any other bait cannot tempt a fastidious fish. It is necessary to cook pearl barley for a long time, until the grains acquire elasticity. There is also a simpler, but reliable way to prepare pearl bait: you need to pour the cereal into a thermos and pour boiling water over it. If you do this in the evening, then by morning the nozzle will be ready.

Broom, mayfly, and wing are a favorite spring treat for many fish. It is necessary to handle these attachments with extreme caution when baiting the hook.

Let's start with a description of the mayfly larvae. The mayfly itself is this small butterfly with white wings with three hairy antennae and three bristles on the tail. Mayfly larvae live in colonies in the water. They dig burrows in steep clay banks at a depth of 1 to 2.5 m or hide under the roots and rhizomes of algae. They extract the grandmother with a scoop on a long handle — they get pieces of clay, put them on the shore, break them up and collect mayfly larvae. Store them in a moistened cloth. Large larvae are planted one by one with a ring, hiding the sting in the tail, and small ones — several pieces, piercing them behind the head. Any white fish pecks at them.

In the spring, some anglers like to harvest insects for the future, so that they can then mix them into the bait as a dry additive. The effectiveness of the use of such additives is obvious, but the extraction of nymphs is laborious, especially in rivers such as the Volga, Oka, where the water level often changes and you have to extract the larva from decent depths.

The wingfish also lives in floodplains of reservoirs throughout the European part of Russia. The angler is familiar with the larva of the wingfish under the name «cuttlefish». It is displayed in early July. For the future, the larvae of the vislokrylki are not harvested. But they catch fish on it with success, especially large roach. It is necessary to look for cuttlefish under the stones.

When one of your authors was on a business trip to Mongolia, a friend taught him to collect this larva in an original way. They entered the cold water in wading boots, one of them stood up one and a half meters downstream from the other, rested a homemade small-mesh net on the bottom, while the other began to actively «trample» the bottom of the river. Dozens of larvae rose from under the rocks above the bottom and were immediately carried away by the current towards the waiting catcher. It was not difficult to collect them further. Then grayling pecked well on them. However, the winglet is also to the taste of many cyprinid fish.

The May beetle is the first attachment in spring for catching large chub. In May, in the evenings, there is a mass flight of this insect. In flight, the May beetle emits a characteristic heavy buzzing, which immediately attracts attention. During the day, the beetles hide under the leaves of trees, and if you shake the flexible trunk of some birch, the beetles will fall from the tree with hail.

Before planting a May beetle on a hook, you need to tear off its stiff wings. Catch the head with the help of this nozzle on top, letting it flow to the places where the fish is hiding.

Shitik — the larva of a brook, a small brown butterfly — is a short worm with a dark head. The body of the larva can be white, greenish, yellowish or brownish. This is one of the best attachments for catching fish that live on the current. Shitik lives in clean streams and rivers, in houses that he builds from grains of sand and debris of plant origin. Shitika is well taken by roach, dace and some other fish that live in clean forest streams. Where small tributaries flow into large rivers, fish are also accustomed to this nozzle, and it is a treat for it. Good places for fishing for brook larva are the estuary areas of tributaries. Here, large roach, bream, podust, gustera, dace, bleak, perch bite well on shitik.

Bark beetle larva. This is a small fleshy worm of a yellowish color. It lives under the bark of old trees, in rotten logs and stumps. You can find the larvae of the bark beetle by the holes-passages that they make in the wood. This is a great attachment for catching any white fish in early and late spring. Fishing is carried out with a float rod in the wiring, as well as with a fly rod in quiet water near coastal shrubs and trees. On the hook, the larva of the bark beetle is baited under the head or ringlet.

Kazara. This is a green dragonfly larva. It can have different shades. It is to the taste of most river fish, especially in spring. Kazara is collected in the roots and on the stems of algae. One of the ways of extraction is to hold a gauze net over the stems of plants. Kazara holds on to the hook quite firmly, but a trifle often knocks her down. The hook is baited with a ring or under the head of one, two or three pieces. They are caught on a kazara wire at the bottom or on a fishing rod with a side nod and a jig near water vegetation.

The leech is a klepsin. It has a brownish, yellow-speckled body. Its length is only 2-3 cm . The klepsin leech lives on algae, for example, it can often be found on the back of the leaves of water lilies, as well as under stones and in the rhizomes of plants. On klepsina, perch, roach, chub and some other fish are successfully caught on fast rifts. They let the nozzle into the wiring at the very bottom. Sometimes dragging on stones brings success.

Maggot. The larva of a meat fly is successfully used as a nozzle both in early and late spring for catching most river fish with float and nodding rods, as well as a donkey. One larva or several larvae are baited on the hook. Maggots are often added to vegetable bait mixtures. Maggots are stored in a box with sawdust. And so that the larvae of the meat fly do not pupate for a long time, the box should be placed in the refrigerator.