The portable mini-boat «Guppy» I — the owner of a 6-meter boat — and my fellow enthusiast — a car enthusiast and a fisherman — designed and built, guided primarily by the need to have an on-board ace for the boat and a boat-cart for the car. Based on this condition, the weight of the boat should not exceed 25 kg, so that it could be freely transported overland, and if necessary, by one person, and without much difficulty, loaded onto the trunk of a car or the cabin of a boat and launched.

The boat had to «fit» into the dimensions of the car and the cabin of the boat. Finally, we were not satisfied with collapsible structures: we wanted to have a rigid, reliable, unsinkable and durable boat with satisfactory seaworthiness and stability.

The idea was suggested by the «Jack-Shprot» boat project (see here), but we decided to build the building from fiberglass. A blockhead was made of slats and thin plywood. To form a flanging-gunwale along the upper edge of the boat's side, the dummy was girded with bars having grooves, and three forms were attached to the bow and stern parts for gluing handles for carrying the boat. A keel and two stringers were attached to the bottom of the dummy, which, forming landings in the hull, were supposed to increase the longitudinal rigidity of the vessel and stability on the course.

Hull design of the mini-boat «Guppy» 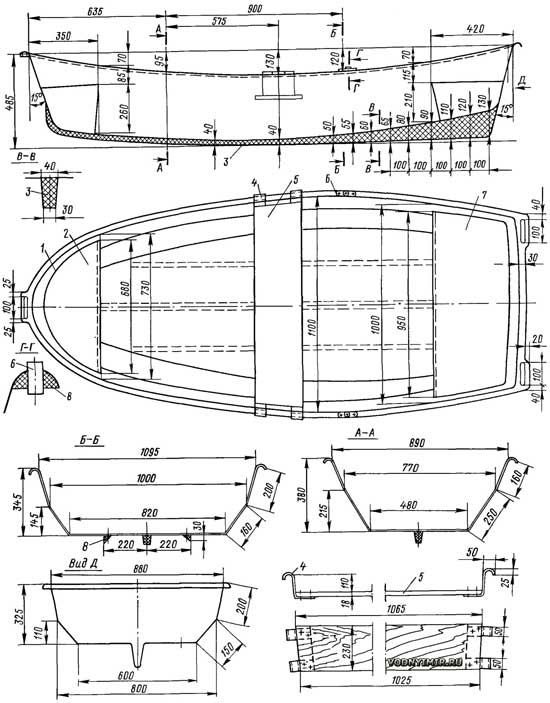 After carefully touching the surface of the blockhead, they applied semi-liquid soap to it as a separating layer. When the soap dried, the surface was polished with a cloth, a second layer was applied and polished again. Eight pieces of fiberglass were cut three meters long each. To give a green color to the prepared binder (polyester resin), chromium dioxide was added (2 tablespoons and 20 g of hardener per liter of resin). The molding process of the case took 3 hours; 24 m of fiberglass, 8 liters of polyester resin, 160 g of hardener and 16 tablespoons of chromium dioxide were consumed.

Four days later, the building the boats were removed from the dummy. The inner surface of the boat turned out to be much better than the outer one. Therefore, they decided to mold the second case not according to the dummy, but to use the body of the already made boat as a matrix. The molding technology has remained the same. Three-meter pieces of fiberglass were soaked in 1 liter of binder and laid, overlapping the keel, first on one side, then on the other. When three layers were laid, the keel cavity and stringers were filled with foam, and then the fourth layer of fiberglass was laid.

For forming the bow and stern cans, vertical and horizontal walls were made of thin foam in advance, which were installed in the hull. Fiberglass scraps were used to form the cans, and only the top two layers were laid from whole pieces. The molding of the cans took 4-5 hours . At the same time, we ensured the tightness of the volumes under the banks in order to obtain an emergency buoyancy reserve.

Four days later, the finished case was removed from the matrix. Four wooden bars of the corresponding cross-section with a length of up to 200 mm were molded into the flanging to attach the poduklyuchins, foam was placed in the handles. After the resin polymerized, all sharp edges were treated.

Two pairs of poduklyuchins were placed 1/3 of the length, respectively, from the transom and the nose, so if there is one person in the boat, then he is sitting backwards on the middle bank. At the same time, the vessel goes on an even keel without trim. If there are two people in the boat, then the passenger is located on the stern bank, and the rower is on the bow. The middle seat can be removed, which is convenient when fishing and walking together, and also allows you to adjust the trim in different cases of boat loading. The 1710 mm long oars proved to be the most convenient.

After finishing, we received a boat with an attractive appearance. Thanks to the introduction of pigment into the resin composition, it was possible to obtain a stable body color that does not need an annual update. The boat was tested on the Neva, Sviri, Luga, Lake Ladoga. She turned out to be very stable, behaved well on excitement, unsinkable. We completely filled the boat with water, and at the same time it maintained positive buoyancy with two people sitting in it. The boat was tested when three adults with a total weight of 270 kg were swimming on it. «Guppy» can withstand four people — two adults and two children (but this is in calm weather).

According to the available matrix, eight cases have already been made. All boat owners, without exception, were satisfied. I believe that the design of the «Guppy» may also be of interest to industry.

The drawings given take into account the shortcomings that were identified during operation. For example, the sizes of cans — stern and bow — have been reduced, which is necessary for a more convenient location of the oarsman and passengers. The height of the keel and stringers has been increased. Slans are not needed in the boat: the bottom is quite rigid and durable.