Pike is characterized by greed and often grabs any moving bait. But one of the main baits for her, of course, live bait and baubles.

Pike for a spinner

On many reservoirs at the beginning of winter there is still no ice, and in such places pike are caught from a boat on fairly large (up to 9 cm) sheer baubles: yellow, white, lead. Pike does not take red-pale baubles so willingly, and does not react at all to silver baubles. In reservoirs where the ice is covered with snow, visibility at the bottom deteriorates sharply. Tin and lead baubles are already becoming a little catchy here, and there is an increased demand for silver baubles. 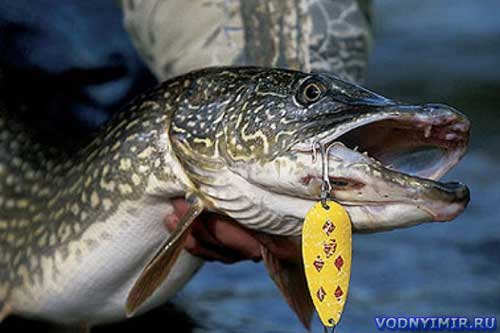 Where to look for a predator? Pike most often stands on deep pits, but prefers not the beginning (if you look downstream) and not the middle, but the edges of the pit and the end of it. She willingly becomes at snags and flooded trees, behind stones. You need to know such places. Here you should also shine. The pauses when flashing are now advantageous to be short. From time to time it is useful to lift the spinner higher — seeing the elusive prey, pike rushes after her.

You should not drill many holes in one place — the fish gets scared and leaves such places. At the same time, it should be borne in mind that in winter the pike moves around the pond a little, mainly in the morning and before the evening dawn.

When fishing for pike on live bait, it is important not to make a mistake in choosing a place. It must be remembered that the pike goes to feed in the coastal grasses, where a trifle always keeps and where it is easier for the predator to disguise itself, to track down gaping perches, roaches, and roaches. The grassy the pond, the more chances of success. It is only necessary not to be lazy to make windows in the grasses, where live bait would walk. The diameter of the window is 1 meter. All aquatic vegetation should be removed from it. It is impossible to leave even a stalk, to which the bait will definitely stick and will stand, but it is necessary that it be in motion.

They catch in the windows in half-waters. Don't be confused by the shallow depth. I had to pull out the pike — yes, what! — in grassy wilds, where the depth was no more than 25 cm. In pursuit of its prey, a predator can get so stranded that sometimes you can see its dorsal plumage. 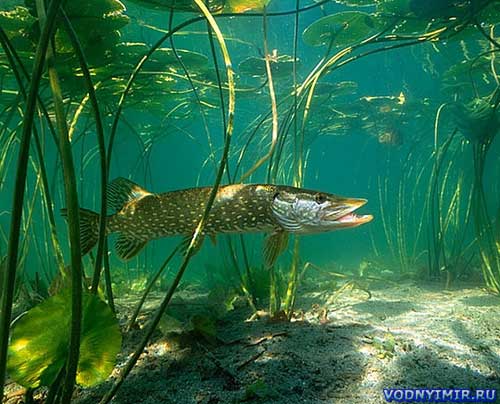 And another tip: strengthen the rod more reliably. If a good pike gets caught, it can pull it out, go with it for a kilometer, or even more.

Perhaps no other fish, brought by an angler to the surface of the water, does not run amok like a pike. Opening her mouth wide, she desperately shakes her head in all directions and at this moment often comes down. An inexperienced angler in such cases, taking a fishing line in his hand, usually gives the pike time to calm down, then to put it in the boat, and makes a mistake — rushing again, she leaves: unhooks, breaks the hook or tears the fishing line.

What should an angler do if he does not have a net? You should never lift a predator above the water. I did not notice that she opened her mouth in the water, and her jerks in this case are not so strong. After making two or three circles, moving away from the boat or under the boat, as far as the fishing line allows, the pike finally stops. At this time, it should be taken by hand.