Motor boat «Sea dart»: we inform you about the details 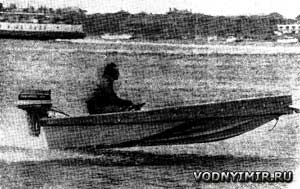 A brief message about the «motor boat without flaws» in «Boats and Yachts» No. 60, judging by the editorial mail, aroused great interest. Excellent driving qualities of the «Sea dart», its high stability, the ability to tow two skiers at the same time under a motor with a capacity of only 25 hp attracted the attention of our water-enginers.

At the request of the editorial board, the designer of the «Sea dart» and the founder of the company «Nuva» for the release of these motor boats to the European market, Barry Stimson, reported some details about his vessel.

As noted in the corporate prospectus, the triple «Sea dart» is intended primarily for those who are fond of water skiing, fishing, scuba diving, walking on the water in order to swim and sunbathe. It is addressed to all those who need a small and inexpensive vessel with a high speed and a spacious deck.

What are its features? When viewed from above, the vessel resembles rather not the dart itself, but its tip. This impression is created by an unusually wide stern (1.98 m — along the hull, up to 2.2 m — along the edges of the sides) with a relatively small total length of the boat — only 4 m. You will not find the usual cockpit with seats on the «Sea dart» motorboat: it is replaced by a solid deck deck, in the center of which a low driver's seat and console are installed. 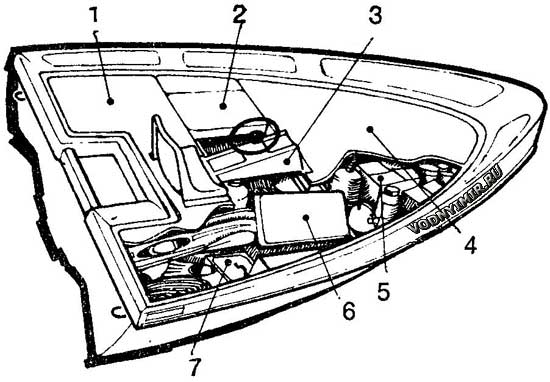 The deck is protected by a low bulwark. With this triangular section of the side, the hull and deck are bolted together into a single unit, so that in case of repair, the boat is easy to disassemble. All equipment, including the fuel tank, is placed under deck. 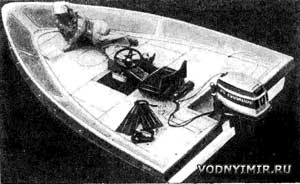 Thus, the «Sea dart» is an uncluttered and stable platform located very low — very close to the surface of the water. Thanks to this, the boat is liked by bathers, water skiers and underwater swimmers who have to climb into it through the side of the water! Only the driver's seat is «regular»; passengers or other crew members can be accommodated sitting or lying on the deck wherever and however they like — there is no noticeable roll or trim. Before proceeding to the no less curious features of the underwater part of the «Sea dart», we note that the deck flooring itself is made of marine plywood. The hull and freeboard section are molded from fiberglass reinforced with glass wool weighing 1.4-2.8 kg/m². The weight of the boat is 113 kg. The buoyancy reserve of about 160 kg is provided by filling special containers under the deck with foamed polyurethane foam.

The hull itself has moderately keeled contours of the bottom: keeling on the transom is about 18°. The traditional keel is replaced by a wide horizontal ski, gently rising and sharpening (getting scrapped in DP) to the nose. The lateral faces of the hydrolange form longitudinal redans-mudguards. Two longitudinal redans with wide working surfaces are molded from each side. The redan closest to the ski is located along the entire length of the hull, and the second one is only on the bow half (it breaks off a little aft from the midsection).

Sketch of the contours of the «Sea dart» 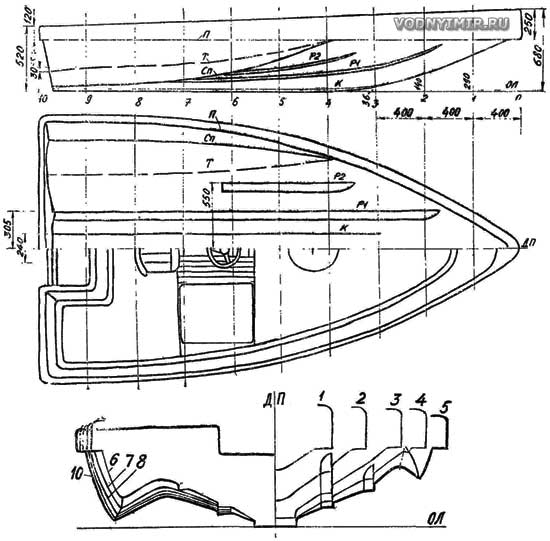 The two side sponsons start approximately 2/5 of the length from the bow; their keel edges are located just above the OL. The arches of the tunnels behind the short «nose» redans have a longitudinal profile — concavity, forming a kind of bottom bend down at the transom section.

What ideas guided the designer when choosing such complex contours of the bottom?

When the propeller thrust begins to act on the ship during the launch, the nose of the «Sea dart», like all conventional motor boats, rises. The appearance of a trim — the lifting of the nose causes the corresponding immersion of the aft, most filled parts of the sponsons; a sharp increase in the displacement of the submerged aft part of the boat, in turn, begins to lower the nose down. The trim of the «Dart» during the planing is small, the «hump» of the resistance curve is smoothed to the limit. This quality of the boat turns out to be extremely valuable even during the skier's start from the water. Some loss of hydrodynamic quality due to keeling is compensated by the creation of additional lifting force on the longitudinal redans.

The designer himself gives the «Dart» the effect of a «pillow»: «In the flow of water falling from the cut-off of the shortened «nose» redan, vortices are formed, and the air tray entering the tunnel turns the water into a mass of bubbles; in the concavity zone, a kind of «foam cushion» is formed from aerated water, which significantly reduces the friction resistance. Water jets falling from the longitudinal redans, hitting the inner surfaces of the sponsons, increase the stability of the boat».

With increasing speed, the «Sea dart» goes on one central hydrolage, the lower edges of the sponsons stop touching the water. «Such features», says Barry Stimson, «allow the Sea Dart to develop high speed at low engine power». The designer patents the contours applied by him.

From time to time, in the restless world of «boting» (the American word for everything related to the pleasure fleet), another boom begins: one or another new project of a small vessel appears, which, according to the inventors' advertising assurances, has absolutely fantastic properties. In nine cases out of ten, it turns out that the novelty, in addition to the advantages, also has some kind of minus, practically nullifying all the «supercharacteristics».

Therefore, in our opinion, Stimson's message should be accompanied by the impressions of Rod Baverstock, an expert of the English magazine «Power Boat and Waterskiing».

When Baverstock heard rumors about the appearance of a «miracle on a pillow of bubbles» at the boat market, he immediately hurried to Cosham, where Stimson's «Sea dart» could be seen. This is some kind of «ugly duckling»! — that was the expert's first impression when he saw the motorboat standing at the pier. The designer who happened to be nearby admitted that he was striving rather to ensure that the boat was practical and durable.

When going out for planing, the boat, indeed, did not have a traditional trim. Managing it «defied all the usual techniques»: it perfectly obeyed the steering wheel, it could be safely «thrown» from side to side, and it practically had no roll on circulation, but only slipped on too sharp turns. Any turns at high speed turned out to be, rather, a test of the crew's ability to stay in the boat, to overcome the action of emerging centrifugal forces. The maneuverability of the «Sea dart» at low speed also turned out to be good, although, naturally, the ability of a boat with such a wide stern to go backwards left much to be desired.

Rod Baverstock, representing the interests of water skiers, of course, first of all began to check the capabilities of the «Sea dart» as a tow truck. After watching how this boat with a 15-horsepower Evinrud easily «pulled» a skier weighing 74 kg from a pontoon and towed him at a speed of 45 km/h, the expert volunteered to «try his luck» himself: after a few tens of meters he (and his weight is 86 kg!) was already sliding behind the tow truck at a speed of 37-41 km/h, and all his efforts to pull the boat off course or slow it down were unsuccessful. When replacing the motor with a more powerful 25-horsepower 74-kilogram skier easily managed to start from the water on a monolith, two skiers on pair skis were able to start at the same time.

Interesting comparisons are made by Roger Witt, a columnist for another English magazine «Practical Boat Owner»: «It can be concluded that the driving qualities of a «Sea dart» with a 15-horsepower engine are approximately equivalent to the driving qualities of a V-shaped hull of the same size, equipped with twice as powerful 30-horsepower engine; power of 25 liters. the power on it is equivalent to 40 hp on a boat of the usual type, and 40 hp — endow the «Sea dart» with the same driving qualities as 60 hp on a conventional motor boat».

However, as Witt rightly notes further, there is not much point in hanging a motor more powerful than 50 hp on the «dart»: the effect of increasing speed will be negated by the sharply increased price, weight and voracity of the engine. «This boat does the same as her older sisters, but with less expense and noise». Indeed, even if the cost of a new 25-horsepower motor is added to the 500 pounds sterling that the «Sea dart» itself costs, the total amount will be approximately equal to the price of a new, but more powerful motor, with which a traditional motor boat reaches the same speed!

To complete the characteristics of the «dart», we add that it passed seaworthiness tests in Portsmouth Harbor with a wind force of up to 7-8 points. The motorboat behaved confidently in the strong disorderly excitement; despite the low freeboard, it remained dry. Only sometimes, when turning, cavitation of a propeller raised too high was observed.

During additional tests, as the designer informed the editorial office, the boat towed a skier weighing 81 kg with a 12-horsepower «Tohatsu».