Japanese houseboat for the open sea 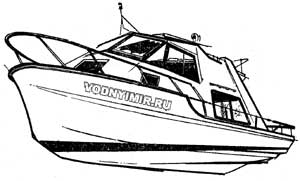 Unlike houseboats, in many used on the rivers and lakes of Europe and America, such comfortable vessels in Japan should be designed for sailing along the sea coast. Accordingly, the low freeboard and stability of the usual type of houseboats are unacceptable for these conditions. Even when using such a vessel for housing in the parking lot, it is affected by wind and wave, therefore, when designing a houseboat, it is necessary to take into account these factors, the ratio of their dynamic and static effects.

A lot depends on which part of the vessel is under water and how much it protrudes into the air. With a small surface area of the boat, the wind has a small effect on its controllability and stability, and vice versa, if the submerged part of the hull (the area of the DP) is small compared to the surface, then such a vessel is unseaworthy.

In Japan, houseboats have not yet become widespread. Firstly, because previously there were rules obliging the owner of a boat with a registered capacity of more than 5 tons to have a special team on board, including a captain and a mechanic above class 3. In addition, in this case, an inspection of the boat was to be carried out, corresponding approximately to the technical inspection of a large-tonnage tanker. If you build a boat with a register capacity of less than 5 tons, then with a length of, for example, 5 m and a width of 2.5 m, the living quarters are not comfortable enough and such a boat is inconvenient for sailing in the sea.

According to the new Japanese standards, with a registered boat capacity of up to 20 tons and a length of less than 12 m, the technical inspection of the boat is carried out by a special inspection for small vessels, persons with a 3rd class certificate (corresponding to the certificate of an amateur boatmaster in the USSR) can operate a vessel with a capacity of more than 5 tons, and the navigation area is allowed in the coastal strip of the sea (at the same time, the length of a boat with a stationary engine is measured from the stem to the axis of the rudder baller). Thanks to this, the problem of owning a comfortable boat in Japan is greatly simplified, and shipbuilding firms believe that an «era» of fascination with floating dachas is coming here. Most people have two days off a week in a row, and they tend to spend their free time with their family at sea. Many of those who were carried on 5-6-meter boats in bays and coves, had a psychological craving for comfortable sailing around the islands of Japan, for a leisurely rest on the water. The proposed draft design of a seaworthy houseboat, developed by Kakehi Osamu in the design bureau of boats together with Jibakku Design Office, represents the optimal, in the opinion of Japanese shipbuilders, features of a vessel for such trips.

The hull of the boat has two-cheek contours. Thanks to the upper cheekbone, the boat has high stability in the parking lot, it is easier to get it to planing with a full load. A large fin keel prevents the boat from being carried off course in crosswinds and serves as a stabilizer for on-board pitching when moving on a wave at low speed. The bottom has a moderate keel, necessary to reduce shock overload. In order to avoid the undesirable influence of the keel on the propulsion, a two-shaft mechanical installation is advisable. Engines with angular reverse gearboxes or rotary-folding columns with a capacity of 60-150 hp can be used.

A distinctive feature of houseboat are the full-height interior spaces. Sketches of the general layout show a spacious, well-lit salon with two sofas and a dining table, a comfortable galley, a vestibule with a spacious wardrobe and a toilet equipped with a shower, a forward sleeping cabin for two people. The boat has two control posts: an internal one located on the starboard side behind the panoramic windshield of the cabin, and an external one on the roof of the superstructure.

The general location of the houseboat pump

The vessel can be equipped with capacious tanks for fuel and fresh water located in the hold. Together with a large width, they provide the boat with the necessary stability. The case is supposed to be made of fiberglass. The total length of the boat is 9 m; the maximum width is 3.3 m; draft is 1.2 m, displacement is about 4.7 tons.

Based on the materials of the Japanese magazine «Yazi».