In winter, several types of wooden wobblers were made, of which one option turned out to be the most successful. The wobbler fairly accurately reproduced the movements of burbot or something similar. With the onset of the summer fishing season, the new wobbler was tested in open water. As soon as the wobbler burrowed deep and passed near the pike or walleye parking lot, then the grip of one of the predators necessarily followed. At the same time, it should be noted that most of the pike and pike perch caught at that time were large specimens. In a relatively short period of time, I managed to catch 29 pike and 4 walleye on this wobbler, of which 8 specimens weighed from 5 kilograms or more. And, probably, I would have caught a lot of fish if I hadn't left the wobbler on one of the deep-seated snags.

I didn't have a second copy of the same wobbler then, and other versions of wobblers made in winter turned out to be much less catchy. Therefore, that season I had to switch to fishing with metal baubles. Subsequently, this type of wobbler took me one of the leading places in the track and spinning fishing of large fish. The peculiarity of this wobbler is its buoyancy and decent weight (it does not need additional cargo), which allows it to be allowed to flow the entire length of the scaffold in inconvenient places for casting, and then, by winding the scaffold on a spool, you can force wobbler go to the desired depth. This is achieved by the speed of winding the scaffold. At the same time, the body of the fish is in constant motion, reproducing the movement of a floating live fish.

The shape, the way of connecting the individual links and the equipment of the wobbler are shown in the figures.

The wood of fir, spruce, willow and other light but hard rocks can serve as a material for making a wooden fish. I do not recommend using linden to make a real wobbler, since its wood is weak and the wobbler is soon «chewed» by pike and walleye.

In its cross-section, the workpiece should have the shape of a rectangle, with the head end equal to 33x27 mm, and the tail end — 22x19 mm. In the head part, at an angle of 46° to the lower plane of the workpiece, you need to make a cut, and then continue processing in such a way that in the finished form the workpiece in its section would represent a segment with a chord formed by the lower plane. Then make the marking again, maintaining the dimensions shown in Fig. 1, and sawing the workpiece into separate links with further processing of each link in accordance with the dimensions of the same figure. After that, it is necessary to drill holes for the connecting wire, as well as hinge sockets in each link and cover the links with drying oil.

The dried links of the wobbler must be connected with a wire, made of mild steel with a cross section of 0.8 mm, as shown in Fig. 3. The connection must begin with the head part. 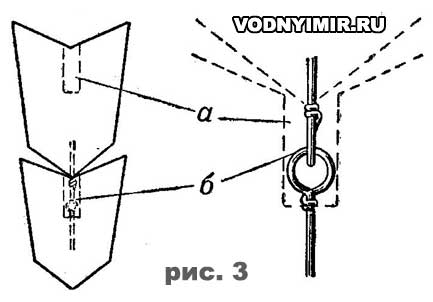 The wobbler should be painted with oil paint, as shown in Fig. 4.

To do this, you need to follow this order:

1. Cover with zinc or lead whitewash and dry.

2. Paint the back with blue or green paint with gradual enlightenment to the sides and dry.

3. Draw eyes, gill covers, mouth and scales (scales are made with silver paint applied by the end of a round stick of the desired diameter with a thin cloth tied to the end of it), and also lightly paint the lower jaw with red paint (without sharp lines).

After the paint dries, fix the mirror (Fig. 2, position — a, made of a thin metal plate) and equip the wobbler with three tees. Tail tee — should be camouflaged with gray feathers.

From all that has been said, it can be seen that the process of making a wobbler is somewhat complicated, but its catchability is such that an amateur fisherman will be rewarded handsomely for his work.