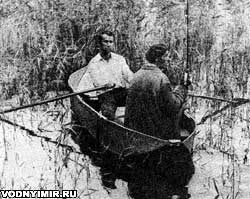 I have long wanted to have a light boat folding into a small package, in which it would be convenient to fish or travel, getting to the most distant and tempting corners of the Karelian Isthmus, in which you could sit down together, and even pack a couple of backpacks. From what I saw in stores, some did not suit me as purely single (55-ruble «hunting», for example), others turned out to be too heavy and not adapted for transportation in the same bus. As a rule, they were all cramped, uncomfortable for rowing, equipped with short oars, under which you can't go anywhere even in a weak wind.

In the end, the idea of building a folding two-seater boat that met all my requirements was born on its own. I made such a boat, and I've been sailing on it for six years now. Tourists and fishing enthusiasts who met on the way asked more than once where I bought it? And most often they did not believe me when I explained that it was not so difficult to make such a boat yourself. So I decided to use the collection to tell about it in more detail and make sketches of the boat are the property of everyone. (And maybe some factories will also be interested in my boat?)

Boat length — 3 m, overall width — about 1.1 m. With the boat's own weight in the assembly less than 20 kg, its carrying capacity is more than sufficient for going out together with all the equipment. Even with a load of 400 kg, you can safely continue swimming on it, although at the same time it sits in the water up to half the height of the side.

Under the two-meter swing oars, the boat has a good stroke — 8-9 km/h, it is easy to control; you can freely make large transitions on it. The restrictions «on seaworthiness» are the same as for any other rowing «two». Once I had a chance to test my folding boat on a real sea wave — in the White Sea. In fresh weather, on an 80-centimeter wave, we safely reached the place.

The boat is also convenient for fishing: it easily walks on reeds, does not sail; it is stable enough — it does not turn over if you stand up to your full height or even one person sits on the edge of the side.

The boat is assembled in 15 minutes, the same amount of time is spent on disassembly. A fully folded boat turns into a package with dimensions of 1x0.45x0.2 m, stacked on a light three-wheeled folding trolley (the wheels fold like an airplane). With such a package, I can get into any transport, it takes up almost no space at home.

Now about how to make such a boat. I collected it on winter evenings, taking my time, spending two or three hours every day. Of course, now, with experience and without wasting time thinking, I could do it much faster.

The main material for 12 flat body parts are duralumin trimmings. I used a 0.5 mm thick duralumin and I think that this thickness is quite enough; the use of a thicker sheet (0.8-1 mm) will make the boat heavier, although, of course, it will simplify the design and make it more reliable. To mark the mating edges of parts 3-9, 4-10, 6-12, 5-11, make a cardboard template (one template is enough, since the bow and stern of the boat are the same, symmetrical).

Scan of the «skin» of the boat; view from the inside
(the keel angles placed outside are conventionally shown)

Obviously, this coupling could be performed in a straight line, but it is better if it is a curve with a sickle shape (deflection arrow) of about 50 mm. If I had to make a second such boat, then I would try to make a keel in the nose so that an oncoming wave would not hit, and I would make the stern wider and transom — there would be more space and it would be possible to hang the Salute motor.

As waterproof flexible «hinges» connecting duralumin parts, 50- and 100-millimeter strips of any reliable rubberized fabric are used; I dissolved a 9 mm thick drive belt into 3-millimeter layers. The transverse wider stripes are made whole, the longitudinal ones are split. At the intersection, the joint is made on B88 glue with a «burr» at a length of 25 mm. I spent a lot of time on these connections, but for all six years I didn't have to use a repair kit (I always had pieces of belt and adhesives with me).

Diagram of the assembled boat with a set
a — fixing of the side branches of the frame and transverse struts; b — fastening of the stem crossbars; c — support of cans.

The strips are superimposed on the duralumin from the outside of the «skin», glued to it with the same glue B88 and riveted with aluminum rivets d=3 with a single-row seam with a pitch of 15 mm. In the extremities, washers are placed under the heads, riveted everywhere from the inside of the skin. According to the keel bend in the DP (it is made only to reduce the dimensions of the package) for children. 1 from one side and on children 4-6 from the other, three parts (13, 14, 15) of the keel square are riveted simultaneously with a strip of fabric. When unfolding the skin — assembly of the boat, the ends of these parts are rigidly connected by two 200-millimeter butt plates 17 (30x30 square segments) on M8 bolts — two on the side from joint.

The rigidity of the hull of the assembled boat, in addition to this outer keel, is provided (see the «kit» diagram):
— plywood floor, in the ends of which the longitudinal stem struts rest with their forks;
— central frame;
— «halt bars» along the upper edge of the side;
— nasal transverse strut;
— bow jar for the rower;
— aft transverse strut with a feed jar.

The plywood floor, assembled from two parts with a flexible hinge in the middle, fits freely on the bottom. Along its length, its position is fixed by longitudinal spacers, adjusted in place. In the middle part of the boat, an average frame is placed on it.

1, 5 — plywood sheets δ=6; 2, 6 — rectangular cutouts — sockets for fixing the position of the lower end of the folding rack under the transverse struts; 3 — duralumin socket (shoe) with a curly groove for fixing the lower end of the rack under the nose can; position banks along the length of the boat are selected depending on the height of the rower; 4 — a soft hinge (belt, rubber) for folding the payole.

The bottom branch of the frame is made of a duralumin tube, the side branches and struts are made of a 25x25 duralumin square. The connection of the branches on the cheekbones is hinged (rivet) for the possibility of folding. The struts are attached pivotally with one end, and with the other — on a bolt with a lamb nut. To attach the frame to the skin, one hole with a diameter of 8 mm is drilled in the upper part of the side branch and a free shelf is cut off; the end of the frame is between the skin and the pipe of the anchor beam.b

Details of the boat set:
a — central frame; b — transverse strut; c — fastening of the «privalny beam» and the ends of the side branches of the frames; d — longitudinal stem strut.

On the fore and aft transverse struts, vertical (side) corners and pillars in the DP are also fixed pivotally. When assembling the boat, the entire set is assembled into a rigid system with ten M8 bolts with wing nuts passed through the anchor beam. Two of the same bolts are attached to the lining of the stem crossbars, pivotally attached to the ends of the longitudinal struts.

To make the rest bars folding, the simplest loop locks are used. One edge of the loop bent along the tube is attached to one tube tightly, the second is hinged so that the other tube turns freely around the axis. In the center of the loop there is a hole for the M8 bolt, which fastens the tube to the side (the nut is superimposed on the outside of the housing). This bolt must be welded to the loop.

The cans lie freely on top of the square supports riveted to the sides; in order to fix the bow jar from shifting along the boat, slots — cutouts are made at the ends to the thickness of the shelf. A tubular piller with clamps is placed under the nasal can, when the tube is turned, entering the grooves of the upper (on the can) and lower (on the paiole) shoes. You can put the same pillers under the feed jar.

Stand under the jar and shoe support (2 pcs.)

A poduklyuchina is riveted to one of the tubes of each privalny bar (no closer than 100 mm from the break).

The paddles are composite. The paddle itself is wooden (the diameter of the spindle is 35 mm), the blade is made of 1 mm thick duralumin with three stiffeners. In the middle of the length, the paddle is folded thanks to the bushing connection; during assembly, a cap nut is screwed on to fix the connection.