Hand-held fin propulsion for the boat

For the movement of light watercraft on the water I suggest using a manual flipper mover instead of paddles. It is easily disassembled into four components, in this form it takes up little space. The dimensions of the parts depend on the size of the boat.

We have made such a propulsor for use on a six-oared yawl and a yacht «Binom-2» with a length of 8 m. The support post 1, the thrust 2 and the lever 3 of this mover had a length of 1000 mm, the fin 4 made of fiberglass 700x800. The first three parts are made of stainless steel pipe with a diameter of 20 mm. On the yawl we got the same speed as on the oars, but on the flipper engine was operated by one person. 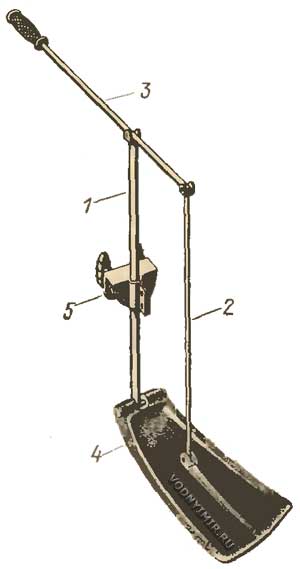 For smaller boats, the propulsion can be made both smaller and lighter. In addition to its compactness, its advantage over oars is that one hand is used for movement and a person sits facing along the course of the boat; the emphasis of the fins is created with greater frequency than on the oars.

A few explanations for those who wish to make a mover. The support post 1 is equipped with a clamp 5 for attachment to the transom of the boat and can rotate and move up and down along its axis. The fin axis is inserted into the heel of the rack. The lever with the rack and rod is connected by bolts to the horizontal axis of rotation. The ratio of the arms of the lever 3 we took 1: 10. The thrust to the fin is also attached with a bolt with a horizontal axis of rotation. The rod 2 and the support post 1 are parallel.