Fishing. Fish of our reservoirs 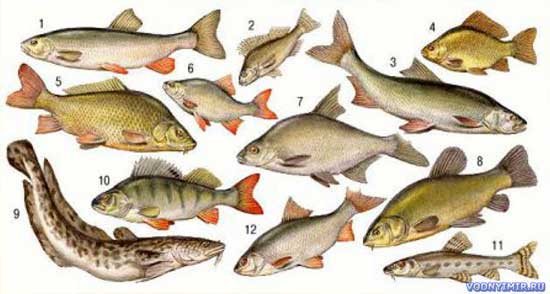 Bream in our country is represented by two types: Aral and Amur. There are other names for this fish: chebak — on the Don River, belak and bream.

Bream inhabits freshwater reservoirs in the basins of the Black, Caspian and Aral Seas, as well as, however much less frequently, in the basin of the White Sea. Occasionally it is found in brackish waters, for example in the Caspian Sea. But it stays mainly near the shores, not far from the mouth of the Volga and other rivers, where it comes in spring for spawning, as well as in autumn for fattening. Bream is almost not found in Siberian rivers.

The body of the bream is high, strongly compressed from the sides. The lower blade of the caudal fin is larger than the upper one, which helps the fish move down. The mouth is in the form of a tube and without teeth. Fat is deposited on the insides.

Bream reach sexual maturity in the fourth or fifth year of life. As a rule, the older (larger) the bream, the more eggs it has.

It should be noted that the salinity of the water greatly affects the condition of the eggs. In water with a salinity of more than 10%, bream eggs die.

The fry stay attached to the stems of water grasses for the first two or three days until the yolk bladder resolves, after which they float away into open places of the reservoir or into thickets of aquatic vegetation.

The growth of bream depends on the nutrition and regime of the reservoir where it lives. In particular, good water heating (+15-18°) is necessary, as well as the complete absence of polluted water effluents. Bream grow much faster in southern reservoirs than in northern ones, and sometimes they are 75 cm long.

Bream fry feed on plankton, mainly crustaceans. Adult bream — moths, mollusks, insect larvae, small invertebrates, worms and algae. At temperatures below +10°, bream almost do not feed. Before the onset of cold weather, they sail away from the coast, foraging for food (more often it happens in the southern seas, for example in the Caspian). Bream living in the Aral Sea leave after spawning to a great depth for feeding.

Bream has few enemies. Adult bream, according to the observations of anglers, even pike are not enough, because its body is very high.

Ide is found mainly in rivers, rivers and lakes with clean, flowing fresh water: for example, in the rivers of the Caspian (with the exception of the Terek and Kuma), the Black (in the rivers of the Crimea and Transcaucasia there is none), the Azov and Baltic Seas, as well as in the Bothnian and Finnish Bays. Quite often ide is found in large flowing lakes — Chudsky, Onega, Ladoga and Ilmen. This fish is able to tolerate very sharp fluctuations in water temperature, which deserves special attention. Note that ide is found in small lakes and ponds, where in summer the water sometimes warms up to the bottom.

The body of the ide is elongated, the mouth is small, oblique, the pharyngeal teeth are double-rowed, the dorsal fin is truncated.

Spawns ide at the age of three or four years. In the European part of Russia, spawning usually occurs in late April — early May at a water temperature of +3-5°. It lays eggs on water plants, to which, being sticky, it quickly adheres.

They feed on insect larvae, small mollusks, worms, algae (filamentous and diatoms). In the spring, when the yazis are hungry, they feed around the clock. However, after the flood, when the water becomes clear, they begin to feed at night.

In summer, in the hot season, they stay most often near the shores of the reservoir. In winter, gathering in flocks, they swim away to deeper places, and after the decline of spring waters, they swim back into rivers and large channels, where they begin spawning. At this time, they are more often found in sandy places, as if they choose a quiet current. However, if there is an obstacle in the way of floating ide, for example, a stab (though not high — 40-50 cm), then the fish jump over it.

Ide is a very cautious fish. He prefers places with an uneven, gnarled bottom, often keeps under steep walls.

There are other names of this fish: chop (Don and Dniester), secret, bershnik.

Bersh lives in the Volga and its main tributaries (but the Volgarian anglers note that there are almost no bersh above Rybinsk, although it is caught in the Sheksna River), it occurs in the Vyatka River, occasionally appears in rivers flowing into the northern part of the Black Sea, the Azov and Caspian Seas, in the Ural rivers, Dnipro, Don and Donets. Anglers note that in rivers it almost always, except in late or early spring, stays in deep places of the reservoir. The color of the bersch is almost the same as that of the walleye. This fish reaches a length of 20-25 cm and a weight of 250-300 g. There are 15-18 branched sharp rays in the dorsal fin of the bersch, which always touch. The forehead is almost twice the diameter of the eye.

The young Bersh has underdeveloped canines. The adult fish has no fangs, the cheeks are covered with rather large scales.

He becomes sexually mature at the 3-4 year of life. Caviar is spawned in early spring or somewhat later if the weather is unfavorable.

Bersh, like pike perch, accumulates a small amount of fat by autumn, which it loses during the winter and spring periods.

Along the way, we note that Bersh, who adheres to the same places in the reservoir as the pike perch, often becomes prey to an adult fast and extremely voracious pike perch.

The chub lives in almost all rivers, starting from the western border of Russia to the Don River; in the Volga, Ural, Northern Dvina; in rivers flowing into the Baltic Sea; in the rivers of the Caucasus, as well as in lakes: Pskov, Chudsky, Ladoga and Ilmen.

Quite often it is found in small rivers and ponds with sandy, rocky, and sometimes even muddy bottoms. In such reservoirs, large chubs keep alone mainly on sandbanks or on rifts with a fast current. Small chubs stand in flocks near the shores at the very surface, where the branches of trees hang over the water. They are attracted to these places by insects falling into the water.

For spawning, chubs gather in flocks and swim to the nearest small tributaries of rivers. Usually large fish spawn before small ones. Spawning occurs on river rifts, mainly in places where the bottom is covered with small pebbles or pebbles.

Adult chub (weighing 700-800 g) in late spring and early summer feeds mainly on fish and crayfish, in addition, May bugs, mayflies and other insects falling into the water. And with the onset of autumn — frogs and minnows. Perhaps we can say that he is a predatory fish.

Chub belongs to those fish that need oxygen-rich water for normal breathing and blood circulation.

This fish in various regions of the Russian Federation has its own names: yelets (the most common), Siberian yelets (aka Baikal) — from Ob to Kolyma, Issyk-Kul chebak and chebachok, ugai (Far East), yalchik, maple and korbus.

Spruce live in almost all rivers and lakes of the European part of Russia; in Western and Eastern Siberia (from the Ob River to the Kolyma River), as well as in the Issyk-Kul and Baikal lakes; in East Asia — in all rivers up to the Amur River.

The Yelets live in rivers and lakes with clean water and a sandy bottom. They almost always stay at depth, on a fast current; during the day — in the riverbed, and at night they swim into long and narrow bays, where they find richer food: bloodworms, mosquitoes and mayflies.

The back of the spruce is blackish, the sides are grayish-blue, the belly is silvery-white. The pectoral and ventral fins are yellowish, the tail and dorsal fins are dark gray, and the eyes are golden.

Spruce trees reach a length of 30 cm and a weight of 0.5 kg. There are 20-30 gill stamens, the mouth is lower, but in Issyk-Kul it is terminal. They don't have antennae. Inside the ring of the first year of life, there is a «fry ring» on the scales, which appears during the transition of the spruce from feeding planktonic organisms to feeding bottom. The height of the body is slightly longer than the length of the head, the stigma is short (its length is less than the width of the forehead).

The males reach sexual maturity at the 5th-6th year of life. They usually spawn in March — April, and in other cold springs — in early May. The few eggs of the spruce are small and rather pale. They spawn, as a rule, in still waters (in backwaters or near the shores of a reservoir) not immediately, but in two or three receptions with fairly significant intervals in time. Usually several flocks spawn at the same time not far from each other.

Some naturalists believe that the spawning time of females is twice as long as that of males.

As for the growth of spruce trees, they grow quite quickly in the first years of their life. By the age of four, they reach a length of 26 cm. It is very rare to come across spruce trees weighing more than 300-400 g, but the Issyk-Kul spruce tree can weigh from 800 g to 2 kg, and the Ugai spruce tree reaches a length of 50 cm and a weight of 1.5 kg.

With the onset of cold weather, young spruce trees from the shores go to the rifts, and adults leave shallow places and gather in deep ones.

Roach (especially its subspecies — roach and ram) is found in almost all reservoirs of Russia (except the Kolyma River).

The body of the roach is flattened from the sides. The color and size of the fins vary depending on the composition of the water and the age of the fish. The older the roach, the brighter the color of its fins. The back of the roach is dark in color, often with a greenish tint, the sides and abdomen are white (silvery), the fins (dorsal and tail) are gray, the pectoral ones are yellowish, and the ventral ones are reddish. But there are fish with golden scales and bright yellow fins. In summer, the body of a roach is often covered with mucus.

Roach becomes sexually mature at the age of 4-5 years. It spawns in spring (usually in late April — early May), but, of course, there may be changes depending on the air temperature (+12-18°). Caviar is usually spawned near the shores of a reservoir where there are many underwater thickets, remnants of reeds or other plants. Roach never makes large spawning migrations.

The maturation of her eggs is greatly influenced by the temperature of the water, as well as the amount of feed and light.

It should be noted that roach can live in oxygen-poor water (4 cm3 oxygen per liter of water). In early spring, it usually stays close to the shores of the reservoir, but sometimes in rivers, though for a short time, it goes upstream. With the appearance of greenery (grass) in the pond, the roach swims into channels, bays and backwaters.

In hot summer, with an increase in water temperature, the roach goes to the deepest places of reservoirs, where it stays for some time. Compared to our other fish, roach grows more slowly. The usual length of an adult roach is 27-34 cm, weight 100-200 g.