Home>>> Boat projects for self-construction>>> Design and construction of a boat — a houseboat. Do-it-yourself houseboat

Design and construction of a boat — a houseboat. Do-it-yourself houseboat 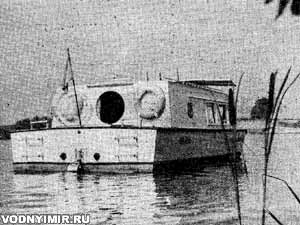 The project of this houseboat based on a 9.5-meter water-jet boat with simplified contours was developed by Ya. Kobachevsky. He also built a solid hull with a double diagonal lining made of pine boards, lined on the outside with 3 mm sheets of AMg-3 alloy. I had a chance to finish building the floating house. This task was complicated by the fact that after the death of the designer, all the sketches and diagrams made by him were lost.

To some extent, the vessel is similar to the «Beryozka», the project of which was published in the third issue of «Boats and Yachts» (1964), but, as it turned out, the hull was designed long before the publication of the collection, but during the completion and equipment of the «Yanta», information from the «Boats and Yachts» and all available materials were widely used.

General view and longitudinal section of the houseboat «Yanta»

An anchor chain with a length of 20 m and two Hall anchors are stored in the forepeak. In the bow there is a «veranda» with two sofas-lockers on the sides, covered with a light duralumin awning of two halves connected on a piano loop.

Add-in houseboat has dimensions in terms of 5.0x3.0 m. Its walls and roof are made of bakelized plywood with a thickness of 10 mm; the roof is covered with epoxy resin. The height of the walls is 1100 mm. Since the horizontal flooring (floor) is lowered below the deck (300 mm from the OL), the height of the rooms turned out to be equal to 1800 mm. For thermal insulation, a layer of foam is laid along the walls and the ceiling. The internal stitching is made of decorative mahogany plywood and plastic with layouts along the beams. The side windows of the cabin are made according to the type of trolleybus with sliding windows, the front viewing windows are made of plexiglass.

The layout of the houseboat «Yanta» 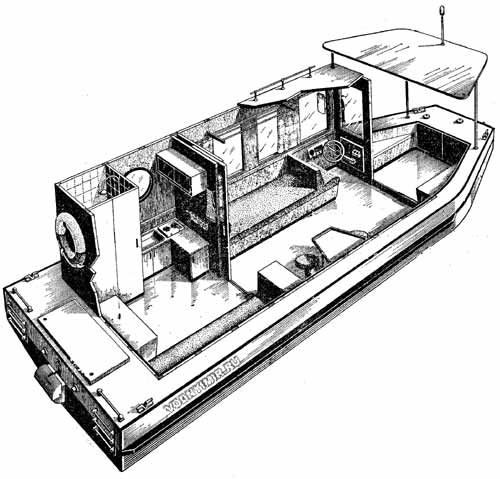 The aft cabin, separated from the cabin by a sliding metal door, is equipped with built-in cabinets for various purposes, hangers and shelves. There is also a kitchen table with shelves, a gas stove and a sink-sink, into which hot and cold water is supplied. Next to the combined bathroom — shower and toilet.

In the stern — in the engine compartment — there is an automobile 45-horsepower «Skoda 1201» engine with an additional casing on the exhaust manifold for heating water. Two gas tanks with a capacity of 80 liters are suspended below the deck; canisters and an inflatable ace boat are also placed here. The deck of the Yanta is covered with corrugated rubber mats on glyptal varnish.

The driver's post is located on the left side in the forward cabin, near the front window. A light lantern made of plexiglass is made over the driver's head.

For two years, in winter and summer, the whole family worked with great passion on the completion and equipment of a floating cottage. And now came the long-awaited moment of the first launch of the «Yanta». What can we say about our ship in general? This is a reliable and comfortable houseboat. Due to the high cabin, the «Yanta» has a large sail, so that the speed is directly dependent on the strength and direction of the wind and ranges from 15 to 20 km/h. Heavy weight causes significant inertia. It was necessary to get used to the peculiarities of controlling the vessel due to the reaction of the jet of a water cannon.

The shape of the hull turned out to be very successful — you can get out with your nose on the shore for almost a third of the hull. The jet of the water cannon, directed under the bottom, easily lifts the hull and pulls it off any shoal.

In the early morning of July, the «Yanta» headed for the Big Volga. Having attached ourselves to a caravan of small vessels, we passed five locks and went out into the Moscow Sea. We follow up the Volga. Strong wind, high wave, but «Yanta» goes confidently.

We go into a picturesque bay. The sedge rustles against the sides. Lilies and water lilies form a solid carpet here. And then, on the way to Kalinin, we deliberately go not along the fairway, but along the coast, visiting shallow bays and the mouths of forest streams. Twice I had to clean the water cannon until I got the hang of passing overgrown places at low speeds — so the algae do not break out and do not clog the engine.

We had a great first vacation on the «Yanta» on the left bank of the Volga, opposite the village of Gorodnya, 207 km from Moscow. In a word, our «Yanta» turned out to be above all praise!