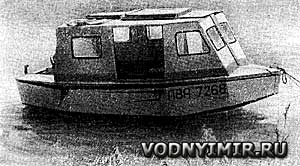 It is very important for residents of cities remote from the «big» water to have such a vessel that could be transported by various modes of transport without much difficulty and stored in an ordinary apartment. These conditions are best met by collapsible soft-skinned kayaks, folding hunting shuttles and a sectional loner «Baby», but all these are purely rowing and uncomfortable vessels, and I wanted to have something like a collapsible motor floating.

The impetus for the independent design of just such a vessel was the sketch of the floating vessel «Ladoga-DA», published in vol. 4 of the magazine «Boats and yachts» and in the book by M. I. Yakubovsky «Amateur construction of portable vessels». After a lot of searching and thinking, I took up the development of drawings and built a 3.8-meter sectional boat with a hard cabin. Here are sketches and explanations necessary for those who are interested in such a mini-boat.

Schematic view of the boat assembly 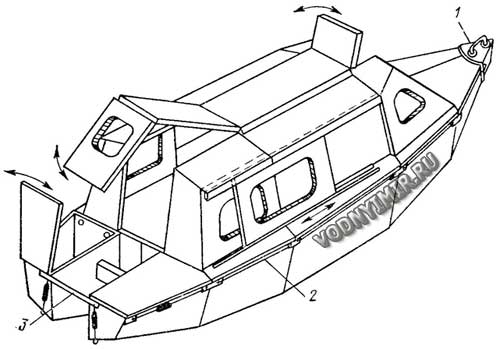 1 — a nose knot with a ring-weft; the nose ends of all four cables are laid behind it; through it, the half-sections of Il and Ip are connected across the body in the nose itself; 2 — a cable with a lanyard; 3 — a 40x40 connecting square; fasten with M6 bolts.

The hull has simplified («faceted») sharp-cheeked contours with a slight keel of the bottom, the collapse of the side along the entire length and some reduction in width in the aft part.

Outline of the hull of the boat

It goes well (even at full load) with a 5-horsepower outboard «Surf», and in principle it can be operated with more powerful motors up to 10-12 hp. At the same time, it is a more seaworthy and roomy vessel than conventional folding boats or, for example, a light collapsible motor boat with a soft skin design. I. Bryzgalova (see here: Collapsible boat with soft skin).

The body has connector planes both in the longitudinal direction — along the diametral plane, along the keel, and in the transverse direction — along four frames. Thus, the hull consists of 10 separate half-sections, bounded by waterproof plywood outer skin, transverse and longitudinal bulkheads. All these bulkheads in compartments II, III and IV reach a height of 350 mm above the main line, so no additional sealing of the joints (even the installation of rubber gaskets) is necessary. Due to the small size of the half-sections, they can be made separately at home, without haste. In the proposed version, their dimensions are selected so that all five half-sections of one side are inserted one into the other and form a package with dimensions of 900x800x700. 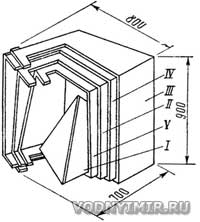 In the end, two such packages with a hull (plus one package with a folded cabin) take up very little space, which simplifies the problem of winter storage. For example, one winter my boat was stored disassembled on the balcony. 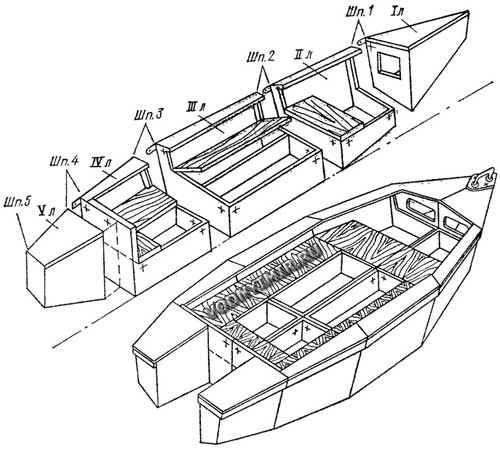 When assembling the boat, first the half-compartments are connected by two M6 bolts in pairs (right and left — in the upper corners through longitudinal bulkheads in the DP); then the compartments are connected to each other by the same bolts through transverse bulkheads, under the deck at the side, through the side plates — duralumin plates (120x30x2) along the privalny beam, and are pulled together by a cable. As on the Ladoga boats designed by M. I. Yakubovsky, the principle of tightening the hull along the length with a soft 3-4 mm steel cable is applied. The tension required in this case is provided by turnbuckle screws. The tensile forces arising in the lower part of the hull are perceived by cables passing from the outside along the bottom of the boat along the keel, and in the upper part — going from the outside along the rest bars.

Double transverse and longitudinal bulkheads and walls protecting the side lockers provide sufficient rigidity and strength of the hull. There is no set, except for strapping on bulkheads, a zygomatic stringer and a privalny beam. 25x25 slats forming a payole are freely laid on the bottom; they are fixed with grooves — cutouts in the longitudinal wall.

The seats — folding covers of drawers-lockers in compartments II-IV are located 250 mm below the deck; this improves stability and allows the crew to comfortably fit in the cabin. Under the seats, you can put all the necessary supplies and provisions even for long trips; oars, fishing rods, a hook lie along the sides.

The bow half-compartments are designed for storing anchors, ladles, rescue and mooring cables, etc. Access to them is through holes in the transverse bulkhead on the shp. 1. Two aft compartments are taken outside the living room: one contains a 20-liter canister, a tank from the engine and cans of oil, the other contains all household accessories. The fuel reserve is enough for about 20 running hours. If desired, you can install another 20-liter canister in the second aft compartment, which will significantly increase the autonomy of navigation.

Typical design of the half-section

1 — cladding, plywood δ=4; 2 — strapping rails and a longitudinal set of 12x30; 3 — knits, plywood δ=4 (from the end of the compartment — plywood stitching of the entire frame); 4 — M6 bolt for docking compartments; 5 — the side part of the deck that reclines on a loop; 6 — the side trim strip, 2x30x120 duralumin for joining sections; 7 — the lid of the locker box, bunk; 8 — the wall of the locker box, freely inserted during the assembly of the boat; fastened with two bolts to the corners on the binding; 9 — the binding of the corners, aluminum strip 0,5x25.

Mounting of the engine board; plan and view from the stern 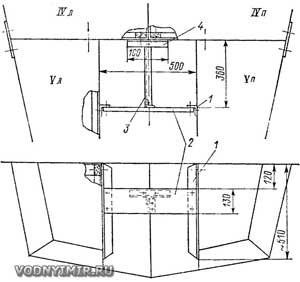 It is most convenient to control the boat by sitting on the transverse drawers-lockers of compartment II. The steering wheel and throttle handle are installed here, the backs of both seats are made folding. The driver's seat is securely closed from the weather by the nose nodes 4 and 5 of the collapsible cabin, which are a high windshield. These nodes are made in the form of folding doors to the sides, which is very convenient (for example, when approaching the shore with the nose).

The main living room is a cabin (compartments II, III and IV), which has an area of 4 m² with a height up to the basement of about 1.3 m. These sizes provide quite normal living conditions when swimming with four. We consider our boat to be a four-seater, but we also sailed on it with six, and sometimes eight people gathered for short exits.

During the day, a removable table is placed in the cabin; its fastenings are made on screws with wing nuts. When arranging a bed for the night, the table cover and folding backs are placed flush with the seats; one common sleeping place is formed. I can add that on cold autumn nights it is noticeably warmer in the cabin than in the tent.

When designing our floating cabin, we proceeded from the fact that the cabin is mainly needed at night and during the day for rest in bad weather, so it was decided to make the hard cabin collapsible.

The lower edges of her bow doors 4 and 5 lie outside on the coaming — a duralumin square fixed to the deck; for the rest of the length, the lower edges of the plywood walls fit tightly into the groove between two slats on the deck (along the perimeter of the cockpit), after which hooks and latch clamps are closed from inside the cabin. The sliding part (children 6 and 7) of the longitudinal walls serves as an entrance-exit door. The middle part of the roof (node 1) is hinged and easily removable — rising up and folding; this provides ventilation of the cabin and free access to the stern.

The whole structure of the cabin consists of seven parts assembled on hinges and folding into planar elements and two beams. Beams 8 to reduce the length of the package are also made folding, with a fold in DP. The beams are cut from the backfanery and have a height of 50 mm in the middle part and 80 mm at the longitudinal walls . In the described design, the beams are fastened to the longitudinal walls of the cabin and the roof section to the beams with the help of «gramophone» snaps-clamps. Naturally, other connection options can also be used, for example, using collapsible hinges that are locked during assembly with pins (nagels).

Design diagram of the boat cabin 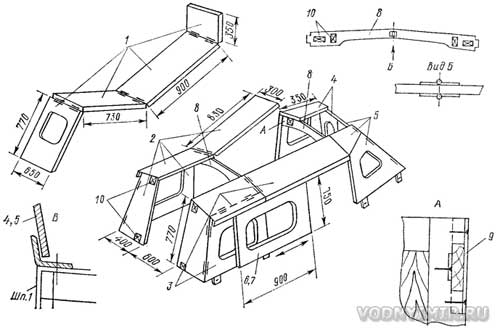 Nodes 1, 2, 3, 4, 5 are assembled on hinges and folded into a plane. Beams 8 of the backfans δ=10 are collapsible (one of the hinges is collapsible). Node A is the attachment of the ends of the beams: the spikes enter the socket (under the bar 9) and the position is fixed by a «gramophone» latch 10. The same latches to the beams (on both sides) are attached to the roof details. Node B — installation of the door coaming on section 1, 6, 7 — sliding walls («doors»).

The time of assembly or disassembly of the cabin does not exceed three minutes. In case of strong wind while running under the engine, the deckhouse is disassembled in compartment II; in this case, the boat can only be operated from compartment IV. In the parking lot, the cabin turns into a lockable locker, where all the equipment is placed, including the motor, oars, boat hook, etc.

Rowlocks are fixed on the bulwarks in the area of compartment III for paddling. On the move, under the motor, the oars unfold along the boat and are laid on the deck; if necessary, you can row them from the cabin, it is enough to move the doors aft.

A little bit about building a boat. It is best if you manage to get scraps of good aviation plywood (one of the advantages of a sectional design is that whole sheets are not needed!). I had to use the most common construction plywood with a thickness of 4 mm. To make it water resistant, I painted it three times with hot drying oil, and then pasted the finished sections with a thin cloth on a meerkat. All sections are assembled on rails with a cross section of 12x30 mm on a water-resistant adhesive with pressing screws.

You can get acquainted with the designs of individual nodes (for example, a tensioning device) from the book by M. I. Yakubovsky mentioned at the beginning of the article; the connections of the cabin structures can be made according to the type of designs used on boats by V. I. Bryzgalov (see Collapsible boat with soft skin).

The operation of our floating boat for three navigations already (on Vuoksa and Cheremenetsky Lake) has shown that it is a fairly reliable and convenient vessel with quite acceptable running qualities, maneuverability and habitability. I can add that it takes us less than two hours to fully assemble and bring the boat ready for sailing.