From the editorial office: When we talk about a hydro bike or an amphibious bicycle catamaran, it goes without saying that the range of its use usually does not go beyond walking along a suburban lake, the nearest river or a well-trodden path in a forest park area. Breakdown or fatigue — it doesn't matter: you can get home by tram or train! Maybe this is why there is not a very high demand for the reliability of such devices, for their use options. As they say, to each his own.

The proposed design of the bicycle catamaran of our reader, the photographer of the Donetsk furniture factory Leonid Mikula completely overturns such familiar ideas.

His biggest hobby has long been tourism. And not just weekend walks, but big tourism. Behind him are the tourist routes of the North and the Urals, the big rivers of Siberia.

In one of the trips along the Ob, the catamaran of Donetsk tourists sailing under the guidance of L. Mikula caught up with the boat of our famous «rowing» traveler Evgeny Smurgis. So the life paths of two travelers devoted to «rowing» kilometers crossed. Already in 1979, Leonid could be seen behind the second pair of oars on the famous «MACH-4» boat. From Igarka to Angara along the Great Yenisei, the travelers passed in 29 running days, leaving 2000 km astern. Maybe it was then, in overcoming the rifts, roaring rapids, shivers, ten-kilometer spills of the great Siberian river, this daring dream was born: to overcome the Yenisei on a bicycle catamaran.

A few years later, Leonid repeated this journey along the Yenisei, but from top to bottom and alone on his bicycle catamaran. There is no need to talk about the reliability of the amphibian, it has been tested in hikes on water and land.

A daring dream is always attractive, and a realized one is doubly so!

The idea of creating a bicycle amphibian fascinated me more than 15 years ago, when I decided to cross our country between its southernmost and northernmost points without using motor vehicles. Gradually, the details of the design of the future amphibian were drawn in my imagination, I carefully considered ways to turn a bicycle from a purely land vehicle into a waterfowl and vice versa. It was clear that all the elements necessary for moving on water should fit into compact luggage, which on the land part of the route had to be transported on the bike itself — on the back trunk or in a backpack.

Sketch of the general location of the bicycle catamaran: a — side view, b — front view 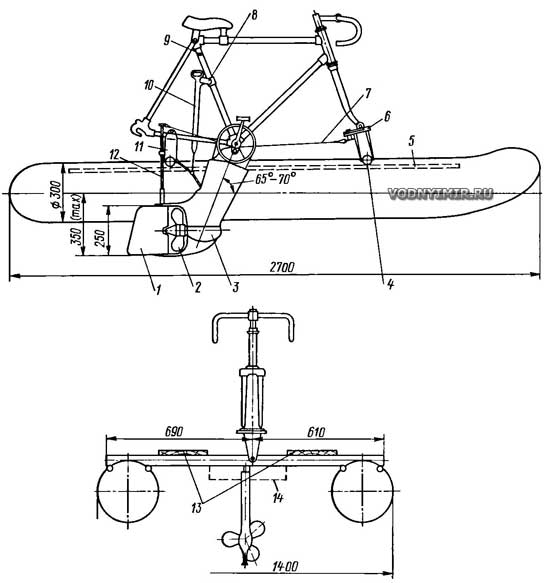 Of all the options, the most convenient in transportation and operation on the water was a bicycle catamaran with inflatable floats and pedal drive on the propeller. In this variant, the bicycle frame is used without significant alterations, and the nodes of its attachment to the floats can be made quite simple. The basis of the catamaran — floats or cylinders with a diameter of 300 mm have a strong shell sewn from rubberized nylon fabric (ventilation pipe) 0.5 mm thick in the underwater part and from straight-weave technical nylon in the surface. Two airtight inflatable elements welded from PVC film are placed in each cylinder. Along each cylinder, two pockets are sewn on top for fastening longitudinal beams made of duralumin tubes with a diameter of 25 mm. Cross beams from the pipe diam are attached to them with the help of special clamps. 48 mm. The mounts allow the cylinders to make small movements relative to each other in the excitement.

The front support 6, which is a U-shaped bracket made of sheet metal, is pivotally attached to the bow transverse beam. A rotating sector is fixed on the upper plate of the bracket on the axis, to which the front fork of the bicycle is attached. The axes of rotation of the sector and the steering column of the bike coincide. On the axis of the sector under the plate, a transverse lever is attached-a rocker arm, the ends of which are connected by cables to the transverse tiller of the water rudder. The angle of rotation of the sector is limited by the upper overhead clip; it is about 30° in each direction.

In the marching position, a springboard with a sewn-in tray 14 made of rubberized fabric is stretched between the transverse beams of the bicycle catamaran, which protects the pedal mechanism from splashing with water. On both sides of the bike, two boards 13 are laid, which are fastened with clips to the cross beams. These boards can also be used as a platform for overnight accommodation equipment if they are laid side by side on the right side of the catamaran. Then a sleeping bag is placed on them.

To protect from rain or overnight on the water, you can install a specially sewn tent, for which two racks with semicircular arches are provided. The height and shape of the tent, windows made of transparent film sewn into its walls make it possible not to stop swimming even in bad weather.

To drive the propeller, a pedal carriage and a bicycle chain are used unchanged, which is wound up on a small gearbox sprocket — the most complex node of the bicycle amphibious design. Its body is milled from a suitable aluminum alloy billet — a window is selected to accommodate the gear mechanism, then the seats for ball bearings are drilled. The hub of the bevel gear is similar in design to the hub of the rear bicycle wheel, on which the driven sprocket is mounted. 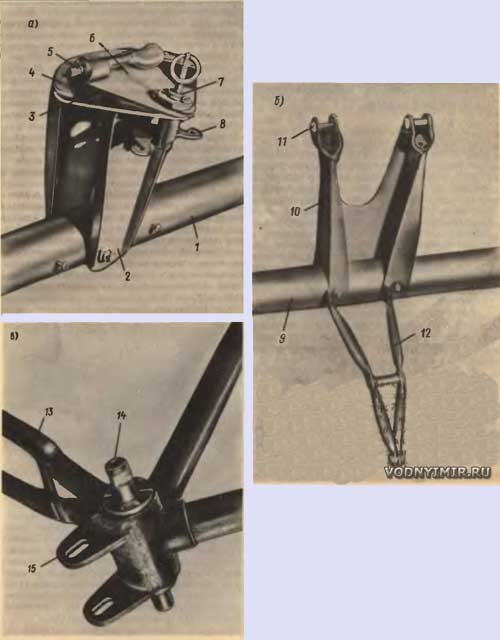 After the preliminary assembly of the gear mechanism, a fin rib is riveted to its body, which is made of a light alloy sheet 1.5 mm thick with overlays on both sides of plywood 6 mm thick. Then, a false shape of the wheel part protruding from the gearbox housing is made of foam, which is laid into the cavity of the disassembled gearbox. The false form is smeared with plasticine, then pasted with 2-3 layers of fiberglass on an epoxy binder with an overlap on the fin. After the resin has cured, the foam is removed from the gearbox cavity, bearing covers, false heads of self-sealing screws are put in place, and the housing is additionally glued with dense foam and a glass mold to give it a streamlined shape.

Then the upper part of the column is prepared for assembly, the solid base of which is a duralumin strip rod. It is riveted with a pre-curved fairing made of a light alloy sheet 0.5 mm thick on a wooden block. The upper part of the fin and the rudder baller support are riveted to the base of the fairing. The assembly assembly is pasted with foam and glass panes to give better streamlining.

Sealing the output of the propeller shaft from the gearbox is sealed with a homemade two-lobed membrane-type oil seal, under which two grooves are threaded on the shaft. 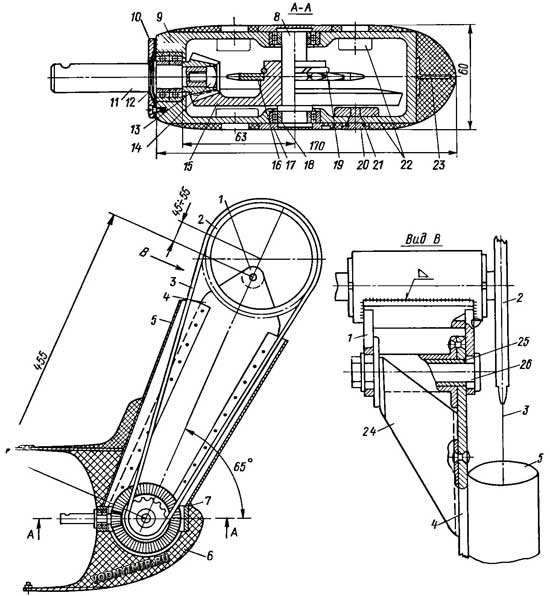 The connector of the upper and lower parts of the drive column is designed as follows. The column base and the fairing rod are connected by inserting connecting flanges into the gearbox cavity and tightening four screws. A rigid gasket with a thickness of about 1.0 mm, closed with polyethylene, is placed along the connector line of the parts. It should somewhat protrude beyond the dimensions of the column. First, one end is molded with a glass mold on epoxy resin, after curing, the other. Now each of the prepared parts of the column is filed, pasted with 2-3 layers of fiberglass, sanded and finally polished. A 1.5 mm thick rubber gasket is placed in the column connector. The excess thickness of the gasket is selected by tightening the self-sealing screws with a conical fit, securely sealing the connector.

The steering wheel pen is of a balancing type, bent from a single piece of sheet metal 0.5 mm thick. It is attached with rivets to a tubular baller, and the pen cavity is filled with foam glued with epoxy resin. The lower end of the pen is put on the finger-support; from above, its continuation is inserted into the square-section hole in the baller tube — a rod with a transverse tiller.

The drive column is attached to the bicycle frame through an eye, into which a sleeve is inserted, riveted to the load-bearing rod. Fixing the column in the desired position (for adjusting the chain tension, setting the optimal angle of inclination of the propeller) is done by clamping the sleeve in the eye with a bolt. Since the length of the sleeve is slightly larger than the width of the eyelet, the column itself retains the ability to rotate around the sleeve.

The drive column is lifted by a lever 10 connected to a hinge rod. In the raised position, the lever is fixed on the stopper 9, located on the frame under the saddle, in the working position — in a special clip of the wedge stopper 8. This stopper is arranged in such a way that when the column hits the bottom of the reservoir, a slightly bent hinge rod knocks the lever out of the clip of the wedge stopper and the column leans up. Thus, the failure of the propeller blades is excluded, you can approach the shallow shore without fear of damaging the column.

Pedaling on a bicycle catamaran is somewhat different from cycling — the lack of inertia of the flywheel affects, the role of which is performed by the rear wheel on the bike. Therefore, when the pedals rotate, dead spots are felt in the upper and lower positions of the connecting rods. However, the legs soon get used to this mode.

The bicycle catamaran uses a propeller-«multipitch» type «Chernomorets-1», which allows you to adjust the pitch of the screw depending on the conditions in the water area and thereby save energy. The catamaran turned out to be quite maneuverable: with a full shift of the steering wheel, the turn takes place literally on the spot. By turning the pedals in the opposite direction, you can go in reverse, and the catamaran retains controllability.

Velokatamaran feels confident and excited. More than once curious locals arriving on motorboats «for acquaintance» tried to overturn the miracle they met with a steep wave. After unsuccessful attempts, they invariably smiled and gave a thumbs up — this was a kind of assessment of my amphibian. And in fact — the catamaran passed its water stage on the Yenisei River (almost 2000 km) without a single breakdown and as a bicycle on land — about 5000 km.