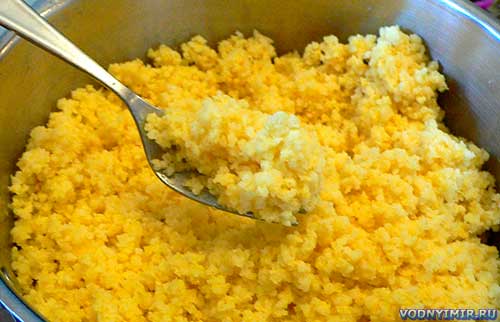 The method of preparing millet porridge for fishing is as follows.

A metal jar with a lid is taken, which is half filled with millet and topped up with water. Then the jar is tightly closed with a lid and tied crosswise with twine or soft wire (preferably aluminum or copper electric wire).

Millet porridge is boiled for 1.5-2 hours, after which it is removed from the pan and allowed to cool. In the cooled form, it is transferred to a bag, and it is ready for use.

Porridge is cut into small cubes that hold very well on hook. Porridge acquires density due to compression during boiling.